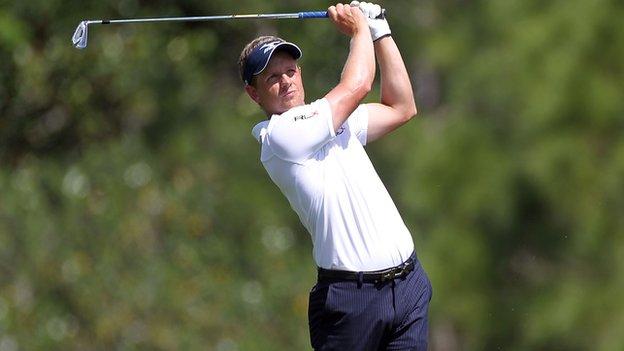 Luke Donald remains in contention at the Transitions Championship at Innisbrook, Florida, ending the third round three shots off the lead.

Englishman Donald, who will replace Rory McIlroy as world number one with victory, carded a one-under 70.

Retief Goosen went round in 65 to share the lead on 11 under with Jim Furyk.

Sang-Moon Bae and Jason Dufner are a shot further back, while Padraig Harrington, who shot a first-round 61, has dropped back to seven under.

Donald holed from a greenside bunker to eagle the par-five first, but an inconsistent round saw him card four bogeys and three birdies.

On the possibility of returning to the top of the world rankings, the 34-year-old said: "I'm not really focused on it, the aim is to win the tournament and everything else takes care of itself.

"I didn't have it today, but I'm still only three back."

Two-time winner Goosen, who has been struggling with a long-term back injury, needed only 25 puts in a round that included seven birdies and only one bogey.

The South African is looking to climb from 52nd in the world rankings to inside the top 50 in order to qualify for the Masters at Augusta.

"It's nice to be back here," said the two-time US Open winner. "It's always great coming back to a course you've done well on before and it was a great round for me. My putter was hot and that's what counts.

"This golf course is one of the best we play on tour and you have to hit the shots, if you don't you're going to struggle, you're not going to get away with hitting it wild. The greens are tricky too."

Goosen's compatriot Ernie Else sits alongside Donald and American Chez Reavie on eight under, with United States pair Ken Duke and John Mallinger a shot better off on nine under.