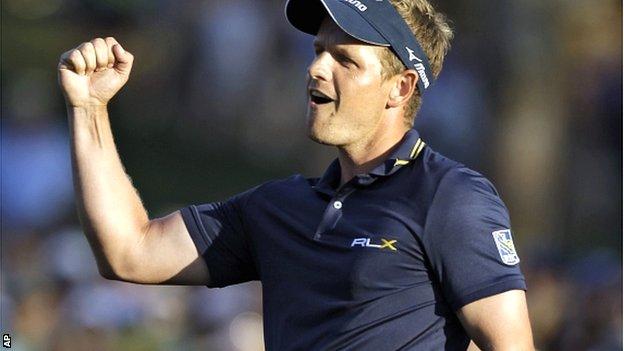 Luke Donald regained the world number one ranking by winning a four-man play-off at the first extra hole in the Transitions Championship in Florida.

Two weeks after losing top spot to Rory McIlroy, Donald shot a 66 and then birdied the 18th to win the play-off.

Ernie Els led in the final stages but bogeyed the last two holes.

CHANGES AT WORLD NO:1

In the first play-off in the tournament's 12-year history, Jim Furyk, Sang-Moon Bae and Robert Garrigus lined up alongside Englishman Donald and the four men began by playing the 18th at the Copperhead Course, Innisbrook.

Donald found the rough on the right with his drive at the long par four but his second shot with an iron cleared the front bunker by a narrow margin and rolled up to within six feet of the flag.

From far closer, and in the middle of the fairway, Garrigus also went close with his pitch but his resulting putt from seven feet drifted left, and Donald holed in the left edge for victory.

"I was a lot more nervous first time around," said Donald, who first became world number one in May last year. "It wasn't my focus this week, I was just trying to win the tournament.

"It's another step in the right direction to getting more confidence towards trying to win majors.

"Well I enjoyed it while it lasted! Congrats Luke Donald! Impressive performance!

"I'll have two weeks off now but it's perfect preparation for Augusta [the Masters]."

Donald began the final day three strokes adrift but surged back into contention with a typically composed bogey-free round.

He pitched to within a foot at the ninth to begin a run of three successive birdies and missed a 12-foot chance for a birdie at the 14th that would have given him a share of the lead.

In the next group Els, who has dropped to 68th in the world rankings and needs to return to the top 50 to qualify for his 19th successive Masters, missed an almost identical putt for the outright lead.

The former world number one will need to win either the Arnold Palmer Invitational starting on Thursday or the Houston Open starting on March 29 to reach the Masters.

The 43-year-old, who is approaching two years without a victory in the United States, had also been three strokes behind the leaders overnight, but was soon ahead and then fired a superb approach to the 16th, only to miss from under five feet chance for a two-shot lead.

After a wait on the 17th tee he hit a wayward shot with a mid-iron to bogey the par three for the third time this week, leaving six players tied for the lead at 13 under.

Then after missing the green with his second at the last he pulled a nervous par putt from inside three feet wide of the cup.

That left the door ajar for both Furyk and South Korean Bae, both of whom could have taken the title with birdies at 18.

But both closed with pars and, when they, along with Garrigus, joined Donald to again play the final hole, the Englishman triumphed.