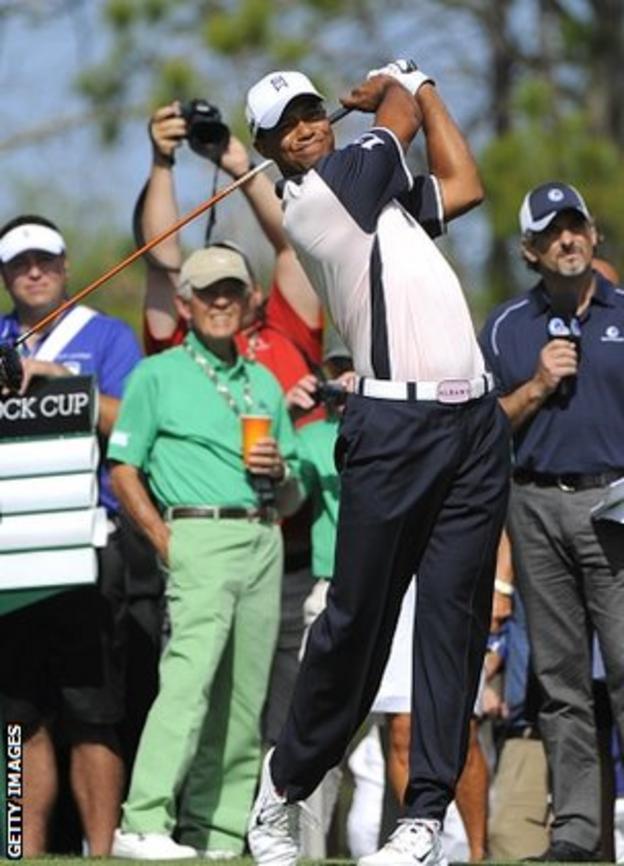 Tiger Woods made a successful return from injury at the two-day Tavistock Cup team event in Florida.

The 36-year-old 14-time major champion withdrew from the final round of the WGC-Cadillac Championship on 11 March with an Achilles tendon injury.

But he joined Justin Rose in a nine-under-par 63 better-ball round for Team Albany at Lake Nona in Orlando.

The event ended on Tuesday with singles and Woods shot a 72 as Albany finished last, Lake Nona winning by two shots.

Lake Nona, whose six-man side included Northern Ireland's Graeme McDowell and Englishman Ross Fisher, finished on 41 under to win the event for a fourth year in succession.

Isleworth were second, with Queenswood finishing 10 shots off the pace and defending champions Albany 15 adrift.

Of the 24 players who competed in the singles the only player to record a worse score than Woods was team-mate Ian Poulter, who returned a 76.

Woods will play at the Bay Hill Invitational event starting on Thursday ahead of the first major of the year, the Masters, which begins on 5 April.

"I want to be ready for Augusta," four-time Masters champion Woods said after Monday's first round. "I have to do the right thing. Unfortunately there are times when I've played when I probably shouldn't have and it's cost me.

"I've done it before and played through not just pain, but injury and set myself back quite a bit. That's what I did last year and missed two major championships because of it.

"I did the smart thing and prudent thing this time, hence I'm back in a week."