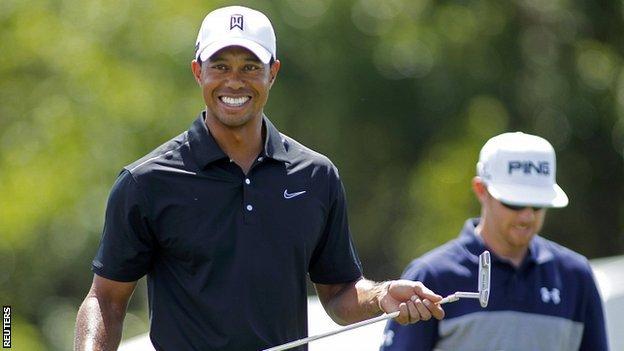 Tiger Woods further eased any injury worries with a three-under-par 69 on day one of the Arnold Palmer Invitational at Bay Hill.

The former world number one, making his final appearance before the Masters, withdrew from his last PGA Tour event - at Doral - with an ankle injury.

But he trails leaders Charlie Wi and Jason Dufner by only three strokes.

England's Justin Rose, who won the WGC-Cadillac Championship at Doral a fortnight ago, is also three under.

Walking alongside Tiger Woods I was struck by how comfortable he feels over tee shots. This is the biggest area of progress since he appointed Sean Foley as his coach, and the result is potent accuracy in his driving. Woods' approach play was not as precise and his putting does not have the reliability of old. On the two occasions he three-putted he paid the penalty for lapses of concentration on judging the pace of the greens. These are mistakes he did not make in his pomp. Nevertheless, he is firmly in contention and his Masters preparations appear firmly on track

Woods, a six-time winner of the title, dropped only one shot when he three-putted the short 17th.

And he will draw a lot of confidence from a round that was four strokes better than that of long-time rival Phil Mickelson.

"I didn't really do anything great today. I was just solid," said Woods. "I drove the ball well, hit my irons decent and putted alright.

"I had two three-putts but also made a couple of bombs out there."

Rose, trying to make it four European winners in a row in the United Sates, was one over after five holes, but sank a 22-foot putt on the 15th and then had three more birdies in four holes from the fourth.

Another win for Rose would take him to a career-high fourth in the world behind Luke Donald, Rory McIlroy and Lee Westwood.

Three-time major winner Ernie Els - hoping to move into the world's top 50 and qualify for Augusta with a top-three finish - returned a 71.