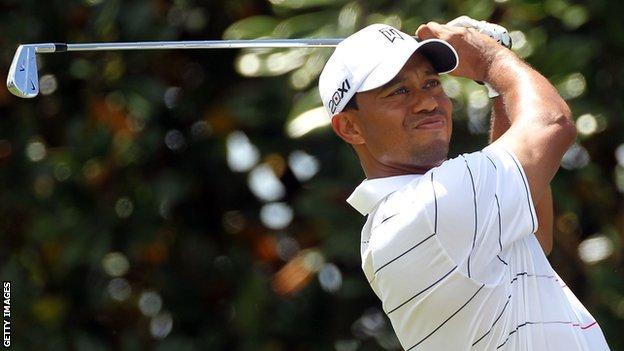 Tiger Woods produced a flawless round of 65 to take a share of the halfway lead at the Arnold Palmer Invitational.

They lead America's Jason Dufner and Northern Ireland's Graeme McDowell by one shot after two rounds in Florida.

McDowell, the 2010 US Open champion, had earlier recorded a superb nine-under round of 63, including seven birdies and an eagle.

England's Justin Rose hit a solid 69 to reach the halfway point in fifth place at six under.

Until Woods mounted his charge McDowell, 32, shared the lead with Dufner, who shot 69. 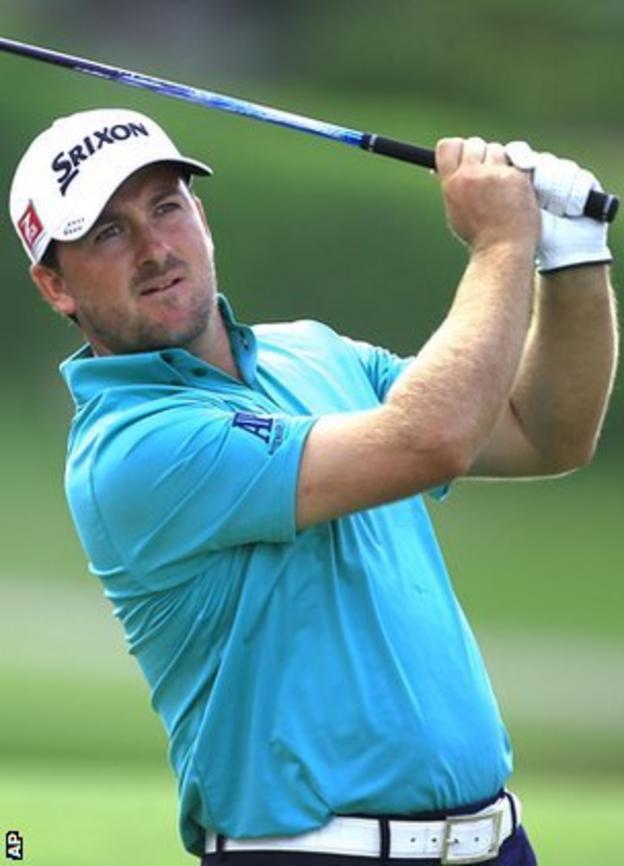 Woods said: "I putted well. I didn't feel I hit it all that great, but the good thing is my misses are better and I played smart."

On the Achilles he strained at Doral a fortnight ago, he added: "I've been getting treatment and everything is moving properly. No swelling, so everything is good."

Woods was in imperious form throughout as he chased his first US PGA Tour victory for more than two-and-a-half years.

The 36-year-old was six shots behind when he teed off, but four successive birdies from the fourth saw him make the turn in 32.

Lucky to avoid driving out of bounds on the 10th - his ball hitting the fence - Woods managed to save par before adding a fifth birdie from 10 feet on the long 12th.

Woods will go into the weekend level with 40-year-old Wi, who carded a 68 to go with his opening 66.

The round of the day, though, belonged to McDowell (pictured, left), who equalled his best ever score in the US with a superb display.

Birdies at the fourth and fifth began his move through the field from joint 27th overnight and he then holed from 27 feet at the short seventh and 32 feet on the next.

A 98-yard pitch to four feet at the 10th took him to five under for the day.

Not even the setback of driving into a bunker on the 12th could spoil McDowell's day, and a lovely third shot to within five feet set up his sixth birdie.

It's amazing to think that someone who won the US Open as recently as 2010 has become something of a forgotten man in UK and Irish golf. Graeme McDowell admits, though, that given the recent deeds of Rory McIlroy, Luke Donald and Lee Westwood he is currently flying under the radar. It seems to suit him well. His second round 63 was a superb display. He is part of a terrific halfway leaderboard but every player on it knows the big dangerman is Woods.

The best was still to come, though. A 215-yard approach to seven feet on the 16th brought an eagle and he rounded off an inward 31 with a 10-foot birdie putt at the last.

McDowell said: "It was one of those rounds that snuck up on me. I played lovely yesterday to shoot level par and got nothing out of the day.

"I got off to a slow start this morning, was getting a little frustrated then made a conscious decision to loosen up a little bit on the greens and started making a few."

It is certainly a great time of year to find your form, with the US Masters a fortnight away.

McDowell said: "My record at Augusta is not very exciting and I decided to shake things up a little bit this year and play the week before."

With the success of British and Irish players in recent years, McDowell said he would love to make a challenge on the top spot in the world rankings.

"Seeing Luke [Donald] and Lee [Westwood] and Rory [McIlroy] tussling for it over the last 12 to 18 months has really heightened my desire to become the best player in the world at some point."

Among the day's other early starters, Spain's Sergio Garcia (67), America's Bubba Watson (70) and Fiji's Vijay Singh (68) all got themselves in good shape for a weekend challenge, at five under, as did American trio Chris Stroud (69), Zach Johnson (68) and Webb Simpson (66).