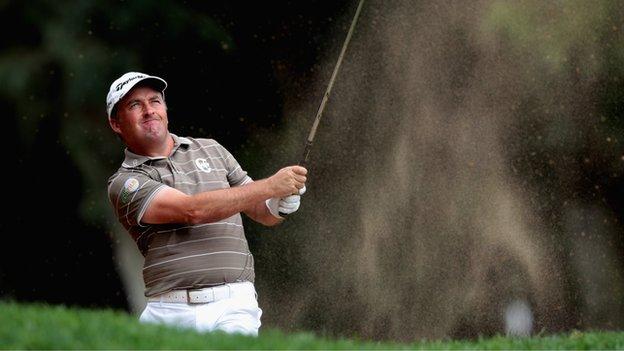 Damien McGrane added a second-round 68 to his opening 65 to retake the lead at the Hassan Trophy in Morocco.

The Irishman only managed five holes on Friday after high winds delayed play.

But he carded four birdies over his remaining 13 holes on Saturday move to 11 under par, a shot clear of Welshman Phillip Price.

England's Robert Rock, who needed a top-two finish in Agadir to qualify for next month's Masters, missed the cut on one over par.

After play was delayed until 1300 local time on Friday, Price carded a 66 to move into the overnight lead, one ahead of Jose Manuel Lara.

Price, forever to be remembered for his Ryder Cup victory over Phil Mickelson at The Belfry in 2002, is chasing his first victory for nine years.

"I'm delighted with that," said the 45-year-old. "It's been a long time since I've been anywhere near a leaderboard. It's nice to be up there."

McGrane's effort on Saturday pushed Price and Lara down a place on the leaderboard, with Sweden' Joel Sjoholm and the Netherlands' Joost Luiten tied for fourth on eight under.