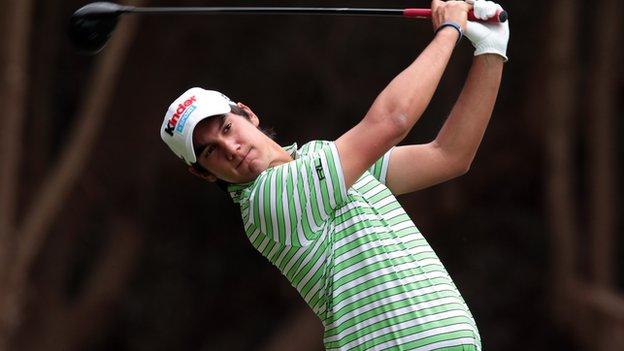 Italian teenager Matteo Manassero made a charge at the Hassan Trophy in Morocco to share the lead with Irishman Damien McGrane.

After high winds delayed play on Friday, both men had to complete their third rounds on Sunday morning.

Manassero carded a seven-under round of 65 to join McGrane, who went around in 71, on 12 under par.

Manassero needs victory to climb into the world's top 50 and earn a place at the Masters in April.

The Italian teenager and McGrane are a shot clear of Jose Manuel Lara, with four players tied for fourth on 10 under.

Speaking on Saturday night, Manassero said: "It was a very good round for me. I have to say that the extra prize of the Masters really helps me as well.

"It gives me extra motivation and I seem to play better in that kind of situation. I had a few months recently where I couldn't get into contention but, after last week and now this week it feels great to be playing well and having chances to win."

I'm in the position you want to be going into the final day. Hopefully I can get the job done

McGrane, 40, whose only European Tour title came by nine shots in China four years ago, started Saturday three behind clubhouse leader Phillip Price but with 13 holes of his second round remaining.

On his return to the Golf du Palais Royal course McGrane birdied the seventh, ninth and 10th to pull level with former Ryder Cup hero Price, before two-putting the long 15th for birdie to take the outright lead.

He holed an important six footer at the last to confirm his halfway advantage, then mixed four birdies with three bogeys over the first 10 holes of his third round to reach 12 under.

"It was a nice way to finish the day with a birdie," said McGrane. "But I have to be honest and say it was a bit of a mixed bag out there.

"Plenty of birdies and bogeys, so not quite as good as the first two rounds. I've actually missed a few fairways out there in the third round and that is probably the easiest thing to do on this course. But I can't complain too much. I'm in the position you want to be going into the final day. Hopefully I can get the job done."

The 34-year-old Lara had carded a 65 on Friday and mixed three birdies with a single bogey over the first 10 holes of his third round.

"It was a difficult day and it was tough conditions for the first few holes today but all in all I am still in a great position," said the twice European Tour winner.