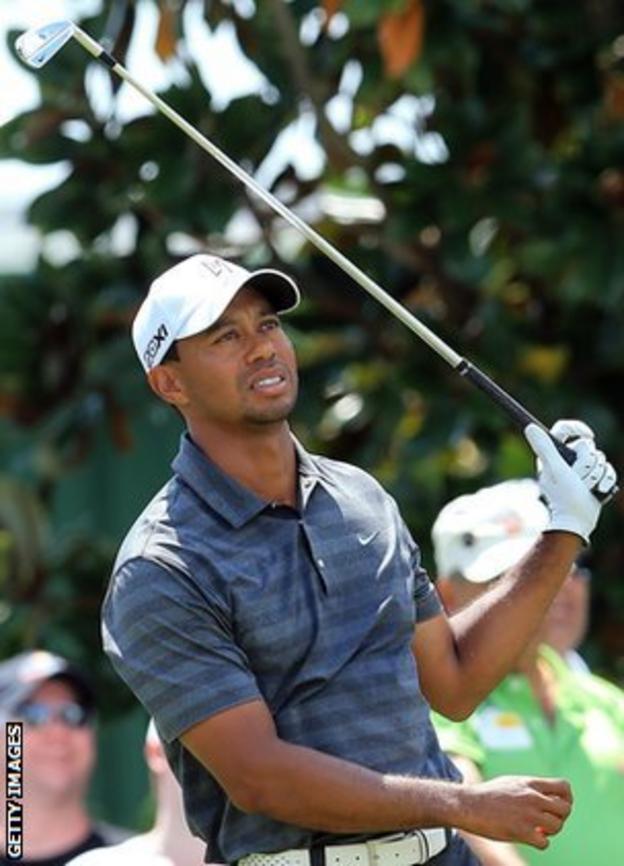 Tiger Woods fired a one-under 71 at Bay Hill to edge into a one-shot lead going into the final round of the Arnold Palmer Invitational in Florida.

But Ernie Els and Ian Poulter are just two shots further back on eight under.

If Els wins, and Matteo Manassero fails to win in Morocco, victory puts him in the world top 50 and into the Masters.

Woods has history on his side when it comes to being in the lead going into the final round, having won 37 times in 39 previous similar positions.

But those two failures came from his two most recent winning positions - and his lead is only one shot over McDowell, who has been successful when playing alongside him before, most notably at the Chevon World Challenge in 2010.

Beginning the day at 10-under, Woods, who won the Chevron World Challenge himself (a non-USPGA Tour counting event) in California in December, suffered an early blow when he dropped a shot at the second.

But, helped by the errors of others, the six-time winner, playing his last event before Augusta in a fortnight, reached the turn in one-under 35 to go from joint leader to two in front.

Woods is golf's ultimate closer. On 48 occasions out of 52 he has converted third-round leads into victories. But his last win on the PGA Tour was 30 months ago and he will be under immense pressure as he tries to protect his narrow advantage. Graeme McDowell is a dogged competitor with fond memories of beating Woods down the stretch at the 2010 Chevron Challenge. Ernie Els will not lack motivation as he bids to claim a place at the Masters, while Ian Poulter feels his 2012 season is starting here and will have plenty of incentive to mount his own challenge for the title.

Then came a 22-foot putt on the 11th to take him to 12 under and he briefly held a four-shot lead. But he then hooked horrifically out of bounds at 15 to run up a double bogey, before hanging on without any further alarms to stay 11-under.

Northern Ireland's McDowell is alone in second, but failed to produce any of the magic of Friday's second-round 63.

"It was a tough grind," said McDowell, runner-up here in 2005. "US Open-esque. The pins are tucked away and I felt I played with the handbrake on.

"I'm looking forward to the opportunity of playing with a man who knows how to get it done round here. I'll probably have to be a bit more positive with my iron play."

Els's 67 was a stunning transformation from a week ago at the Transitions Championship when he led by one with two holes to play, but bogeyed both and dropped to fifth.

"I've got some hope again," said Els, after finishing with a 13-foot birdie on the last.

"I've had a pretty smooth career, but the last 18 months I've been through the mill."

Poulter, still recovering from a bout of pneumonia, was clearly better as he eagled the fourth and came back from a bogey at the 14th with birdies on the next two to card a 68.

"The only blemish I had was a three-putt from 30 feet," said Poulter. "But I holed a nice 35-foot putt for eagle.

"This is a tricky course. You have to play it sensibly and try and take your chances when you get them. I will steer my golf ball around, have some fun and see what happens. I don't have Augusta on my mind at all and I won't have until next Monday."

Justin Rose, winner of the Cadillac Championship two weeks ago, fell back from fifth to 14th with a 74, while defending champion Martin Laird shot the same score to slide from 12th to 25th and Sergio Garcia fell away with a 75.