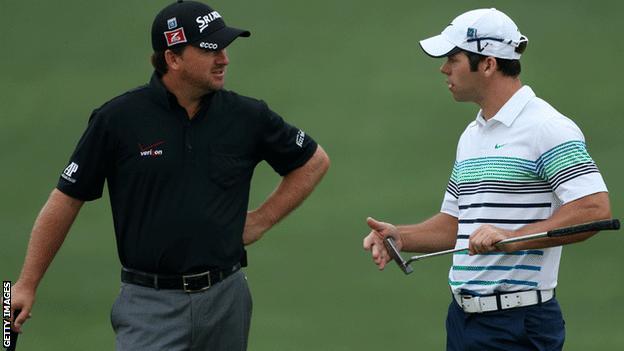 Graeme McDowell believes that this week's Masters has one of the strongest fields of the modern era despite all the attention being focused on Tiger Woods and Rory McIlroy.

"I don't think it's a Tiger/Rory head to head," insisted 2010 US Open champion McDowell.

"There are a lot of contenders this week. Myself, [Lee] Westwood, [Luke] Donald, Hunter Mahan, Keegan Bradley and [Phil] Mickelson.

"There are so many names on the page."

McDowell added:"To me this is as good and as wide open a Masters as I've been involved in and it's great to feel that I'm one of the guys that can contend this week."

The 2010 Ryder Cup hero agrees that Woods looked "ominously good" when he triumphed at Bay Hill two weeks ago as McDowell finished runner-up.

"I played with him here at Augusta last year in the first two rounds. Seeing his game now compared to what it was 12 months ago, he's got the ball under control again.

"This time last year, he had a few destructive shots in his bag.

"But I think the rest of the field has stepped up as well. I don't think he's going to find winning maybe quite as easy as he did in the mid-2000s."

McDowell, 32, is convinced that his compatriot McIlroy will be in contention come Sunday afternoon.

"I'm sure he feels that he's got a demons to exorcise this week but if Rory McIlroy was to design a golf course, it would probably look a little bit like Augusta.

"It's tailor-made for the way he drives the ball and can float his irons.

"He's so full of confidence right now. He has a huge amount of belief so I expect him to be there or thereabouts."

As for his own prospects, McDowell admits his Augusta record is not good with a 17th place his previous best but the Portrush man is convinced that he can contend.

"Last year I think I was second in greens yet I missed the cut because I putted awfully but I know I can putt on these greens.

"I know I can strike if from tee to green so it's just a case of putting it all together.