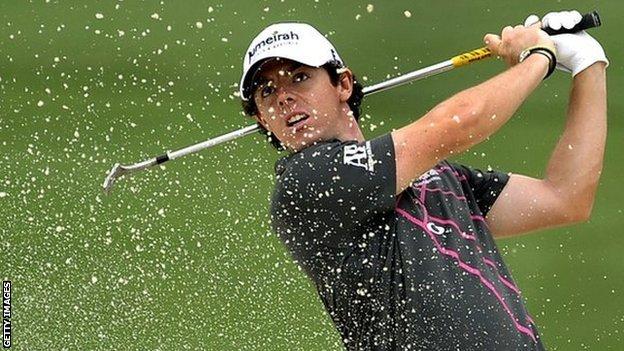 Tiger Woods and Rory McIlroy are the top two in the betting but a host of the world's top players will be looking to upset the odds when the 76th Masters gets under way on Thursday.

Four-time champion Woods appears back in form with a victory last month to suggest he is the man to beat around Augusta.

World number two McIlroy has also won recently and 12 months after blowing a four-shot lead going into the final day returns as US Open champion.

But Luke Donald, the world number one, three-time winner Phil Mickelson, Lee Westwood and in-form American Hunter Mahan are other names to watch in the year's first major.

The 36-year-old Woods won his first PGA Tour event for 30 months at Bay Hill to announce his comeback after several years of turmoil in his private life, injuries and swing changes.

The former world number one plunged outside the world's top 20 but is now back up to seventh and claims he is hitting the ball as well as he did in 2000 when he won three majors, before clinching the 2001 Masters to hold all four of the marquee titles at the same time.

"I'm excited. Everything is heading in the right direction at the right time," said Woods, who won his first Masters title 15 years ago and has not finished out of the top six for the past seven years.

Victory on Sunday would leave him just one behind Jack Nicklaus's record of six Green Jackets and take him to 15 major titles, three off Nicklaus's mark of 18.

McIlroy, 22, returns intent on putting behind him last year's infamous final-round 80 having led for three days. In fact, his disaster could have been the making of him as he went on to totally dominate the US Open two months later and clinch his first major title. On Tuesday he insisted he is a "better person and better golfer".

"Obviously there are memories that come back and memories you don't want," said McIlroy. "It's fine. I got all that out of the way. I'm looking forward to trying to put myself in contention to win this thing."

Donald was overtaken as world number one by McIlroy earlier this year but he regained top spot with a victory in March for his fifth win in 14 months. The Chicago-based Englishman, who is considered one of the best short-game exponents of his generation, has a best Masters finish of third - on his debut in 2005 - and was fourth last year.

"I feel very good about this course. Having a good short game is important here," said Donald, who opted not to defend his par-three tournament title to focus on the main event. "What's very magical about this tournament is usually Sunday is a great chance to make a run."

Donald was joined in skipping the par-three competition by Open champion Darren Clarke, the Northern Irishman describing himself as "sore" as he tries to overcome a groin injury.

"I don't think another nine holes is going to do it any good," the 43-year-old said.

Mickelson, 41, won the last of his three Masters titles in 2010 and is bidding to join Woods and Arnold Palmer on four Green Jackets.

"The entire off-season we have been dreaming about this week starting," said Mickelson. "It's my favourite week of the year and I just enjoy every minute of it."

Westwood, 38, is also still searching for a first major title after finishing second in the Masters and Open in 2010 and recording six other top-five finishes in majors. The Englishman has been gearing his game specifically for this week since the end of the US PGA last August.

"It's great for the game of golf and the Masters that it's been such a good run into it with the top players winning big events and Tiger coming back into form. It's whipped up a bit of a frenzy."

America's Mahan has won twice this season to move up to fourth in the world, while England's Justin Rose, who has led or shared the lead at some point on all four days in previous Masters, also triumphed in the US recently.

South Africa's Charl Schwartzel was the surprise winner last year after storming to his first major title with four birdies in the last four holes. Now up to eighth in the world, Schwartzel is bidding to become only the fourth player to record back-to-back Masters titles after Nicklaus (1966), Faldo (1990) and Woods (2002).

Rising American star Keegan Bradley, the US PGA champion, is playing in his first Masters but the last time a debutant won was Fuzzy Zoeller in 1979.

Woods tees off with Miguel Angel Jimenez and Bae Sang-Moon at 1035 (1535BST) on Thursday with McIlroy off in the penultimate group alongside former champion Angel Cabrera and Bubba Watson at 1342 (1842 BST).

Donald follows Woods's group with Mickelson bringing up the rear in the company of Mahan and Peter Hanson at 1353 (1853 BST).

Golf legends Palmer, Jack Nicklaus and Gary Player will hit the ceremonial opening tee shots ahead of the 96-man field at 0740 (1240 BST).

The Augusta area was hit by thunderstorms on Tuesday night and further rain lashed the course on Wednesday afternoon, causing the par-three tournament to be suspended early. But officials are confident that the course will be playable despite further showers and thunderstorms set for Thursday. No rain is in the weekend forecast.

"Clearly, the golf course will not be as firm and fast as it would otherwise be," said Fred Ridley, chairman of the Masters' competition committee. "We are very confident that we will have comparable tournament-speed greens.