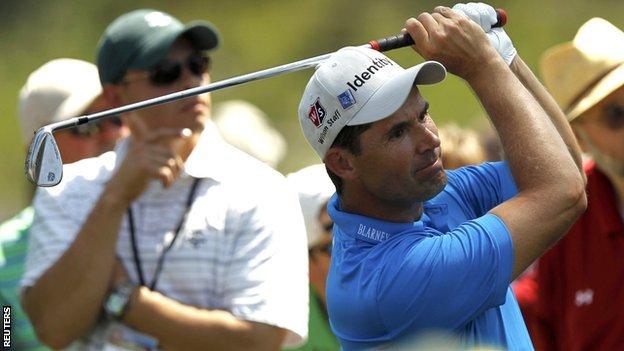 Two-time Open champion Padraig Harrington has shared the title in the par three competition that is the traditional Masters curtain-raiser.

Harrington, 40, was tied on five under par with American Jonathan Byrd when the event was curtailed by lightning in the Augusta area.

In the 52 years since the par three competition was founded in 1960, no winner has ever gone onto win the Masters proper. The closest was Ray Floyd who won the par-three in 1990 but lost the main event to Nick Faldo in a play-off.

The win makes it a hat-trick for Harrington in the event, the first time any golfer has won it three times.

However, no par-three winner has gone on to claim the Masters' Green Jacket.

Irishman Harrington has tied to win the event once before with David Toms in 2003, and won it outright in 2004.

Last year's winner and world number one, Luke Donald, opted out of playing in the competition this time around.

Thomas Bjorn, who was caddied in his round by Declan Donnelly of Ant and Dec fame, finished his eventful nine holes with a hole-in-one.

He was matched by Mark Wilson, who hit his ace on the fourth, to make it 75 holes-in-one since the competition started in 1960.