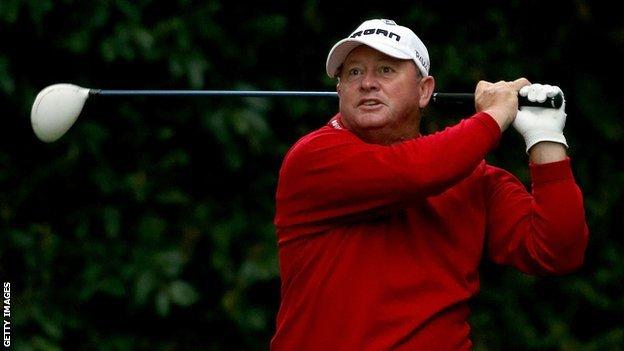 Ian Woosnam missed the cut at his 24th Masters as he finished 10 over par.

The 1991 winner and former world number one shot five over par on both days to miss his 11th cut in 12 outings.

Birdies on the opening two holes on day two rekindled hope of making the weekend but double bogeys on five and seven damaged the 54-year-old's card.

Woosnam's tournament concluded with a bogey on the 18th as he joined former Shropshire junior rival and long-time friend Sandy Lyle in an early exit.

Woosnam played alongside Italian Eduardo Molinari and American Kevin Chappell in the first major tournament of the year.

But three dropped shots on the back nine of his opening round placed him alongside Tom Watson and KJ Choi on five over after day one.

Europe's 2006 Ryder Cup winning captain showed a glimpse of his old form when he birdied the par three 12th on Friday but a bogey on 18 took Woosnam's score to 10 over par.

Woosnam, who suffers spondylitis and requires a weekly injection in his troubled back in order to continue to play golf competitively, has only made the Masters cut once - in 2008 - since 2000.

But the Welsh golfing great was in good company at Augusta 2012 as Paul Casey, Tom Watson, Jose Maria Olazabal, KJ Choi and reigning Open champion Darren Clarke all failed to make the weekend at the Masters.