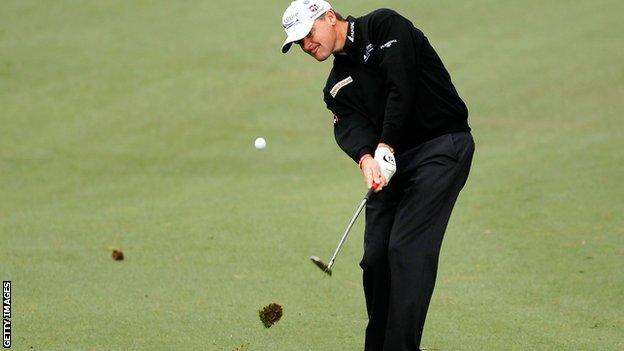 Paul Lawrie finished with a fabulous run of three consecutive birdies on the second day of The Masters to stay in touch with the leading players.

The 43-year-old ended the day where he started, on three under par, having thrown away four strokes following an early gain at the third hole.

The highlight of the Aberdonian's round was sinking a huge putt at the 16th.

Fellow Scot Martin Laird birdied the final hole to make sure of his continued participation.

The US-based Glaswegian managed a 72, with five gains balanced by five bogeys, to stand on four over par.

But countryman Sandy Lyle failed to make the cut by some distance.

Lawrie opened his first Masters since 2004 with an excellent 69 and will be delighted to have matched Laird's score on a second round that threatened to unravel at one stage.

After picking up a shot at the third, bogeys at the fourth and ninth holes saw the 1999 Open champion reach the turn at one over for the day.

But a lost ball from the tee at the 12th and a fluffed greenside chip at the 14th saw him lose more ground.

Lawrie displayed great mettle to only drop one shot on each of those occasions and was rewarded for digging in when he holed out a mammoth, snaking putt at the par-three 16th.

His confidence up, two more gains were made on the difficult closing holes to finish two strokes behind co-leaders Fred Couples and Jason Dufner.

"There are a lot of better players than me on that leaderboard but, if I keep playing well, I might have a chance," Lawrie told BBC Sport.

Lyle, the first British player to win the Green Jacket in 1988, finished at the bottom of the pile on a whopping 20 over par, following his opening round of 86 with a 78, although he finished serenely with four consecutive pars.