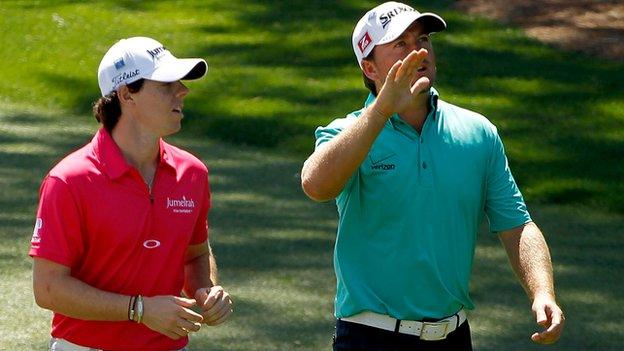 Graeme McDowell ended his Masters on a positive note as he fired a 68 to finish on two under par at Augusta.

The 2010 US Open champion, playing with Rory McIlroy, recovered from an opening bogey to card six birdies.

McDowell ended in a tie for 12th position, with Padraig Harrington joint eighth on four under after a final-round 72, which ended with two bogeys.

After his disappointing 77 on Saturday, McIlroy's struggles continued as he fired a closing 76 to finish five over.

That left the reigning US Open champion in a tie for 40th spot.

After his opening bogey, McDowell birdied the second before dropping another shot at the sixth.

However, the Northern Irishman then birdied the seventh and eighth to go to the turn in 35 and further birdies came at the 12th, 15th and 16th.

McIlroy started the day one over and his struggles at the opening hole continued with another bogey.

Further shots went at the fifth and seventh before a birdie on nine left him out in 38.

Last year's US Open champion suffered a double bogey at the 11th and dropped a further shot on 14 before late birdies on 15 and 17.

Both players had finished the tournament on 10 under.