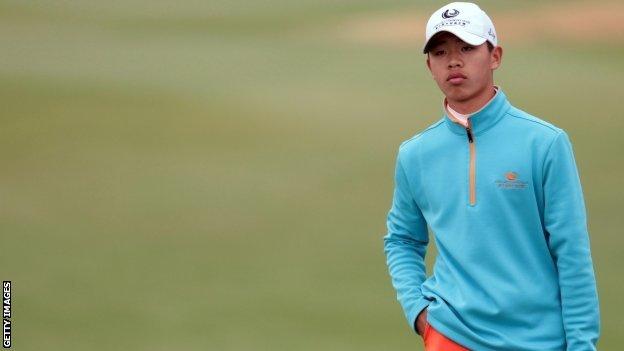 Guan Tian-lang has missed the chance to become the youngest player to make the cut in a European Tour event at the China Open in Tianjin.

The Chinese amateur, who on Thursday became the Tour's youngest player at 13 years, 173 days, missed the cut by 10 shots, finishing on 12 over par.

England's Gary Boyd shares the halfway lead with France's Jean-Baptiste Gonnet on 11 under after they both shot 67.

Boyd, 25, who birdied five of his last eight holes, said: "I had to stay patient and was one over playing my ninth hole but managed to get on in two and two putt for birdie and really get my round going.

"The back nine I managed to take a few more chances and finished it off with a three wood to eight feet on the ninth - it was the shot of the year so far for me."

Branden Grace, who drove the green on the par-four seventh before knocking in a five-foot putt for an eagle two, is third, one shot back, after also shooting a five-under-par 67.

The South African, who won consecutive events at the start of the season in his home country after coming through qualifying school, said: "I didn't take any chances on the holes that could cause me real trouble."

Defending champion Nicolas Colsaerts of Belgium, starting on the 10th, birdied his first two holes as he too carded a 67 to move to nine under.

Overnight leader Matthew Baldwin of England slipped back to six under par after a one-over 73.

Fellow Englishman Paul Casey, who began the day in contention on four under, missed the cut after a quintuple-bogey 10 at the par-five 12th and two further double bogeys in a seven-over-par 79.

The youngest player to make a European Tour cut is China's Jason Hak, who played all 72 holes at the Hong Kong Open as a 14-year-old amateur in 2008.