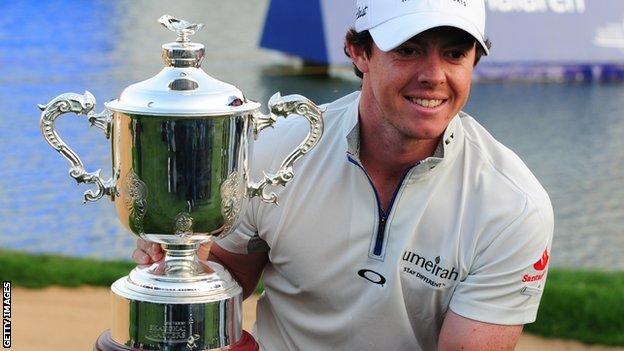 The tournament with the richest first prize in golf last year is joining the European Tour calendar for 2012.

Last year's maiden event was not sanctioned by a major tour but it has been rebranded as the BMW Masters and added to the European Tour.

McIlroy, who beat Anthony Kim in a play-off, said he was looking forward to defending his title, adding "the tournament will be one of the best".

The golfing compass has long since pointed East and this addition to the calendar means there are now 12 European Tour events in Asia this year. A stellar line up will chase a lucrative prize fund but it means the Tour will be putting on limited field events in consecutive stops, with the WGC tournament in Shenzen following week. This will not sit as well with lower ranked players, particularly those trying to retain their cards with a strong finish to the year. The Tour is capitalising on the buoyant Asian market while the European sponsorship scene remains relatively depressed.

The event will take place at Lake Malaran, Shanghai, from 25-28 October with a field of 78 competing for total prize money of £4.3m.

It will be played the week before the WGC-HSBC Champions, which this year has been switched from Sheshan near Shanghai to Mission Hills in Shenzhen.

Open champion Darren Clarke, who is en route to South Korea for this week's Ballantine's Championship, helped to launch the event at the Beijing Auto Show.

The BMW Masters bring the total number of tournaments on the 2012 Race to Dubai to 47, and will be one of three on mainland China this year.