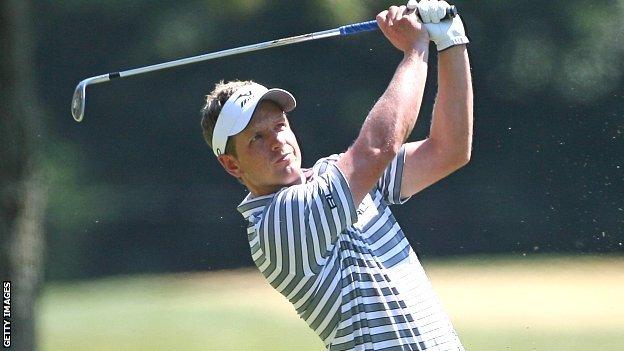 In May, Donald will try to defend his BMW PGA Championship title at Wentworth in one of two Tour events - along with the Open - held in England this year.

"It would be great to have more in England," Donald told BBC Radio 5 live.

"With myself, Lee [Westwood], Ian Poulter, Justin Rose and others from Britain playing so well, it makes sense to me to push to get another event."

Donald spent 40 weeks as world number one before being overtaken by Northern Ireland's Rory McIlroy. He briefly regained top spot but McIlroy has since reclaimed it. Donald is currently sandwiched between McIlroy and fellow Englishman Lee Westwood, himself a former number one.

It is a strong period for British golf, with Justin Rose (10), Graeme McDowell (18) and Ian Poulter (25) also performing well in the rankings.

"We are very friendly off the course but on the course it is extremely competitive," said Donald. "If you look at the world rankings and the success we've had we're all happy for each other but when we're playing against each other we don't want to lose."

Donald admits that while it is difficult to ignore the rankings, his focus remains the quality of his game.

"There is a lot more jostling back and forth for that number one spot, which makes it interesting for the media and the fans," he admitted. "But I'm not thinking about it when I'm on the golf course. My focus is to play well and put myself in contention to win."

Donald was amongst the favourites going into the Masters at Augusta earlier this month but was not at his best and finished joint 32nd with a combined score of three over.

He is currently competing in the Zurich Classic in New Orleans as he looks forward to competing at the Players' Championship at Sawgrass from 10 May and then the PGA Championship, which gets under way on 24 May.

"I'm still going out there and being diligent on working on what I need to improve," added Donald. "After the Masters I sat down and thought about what didn't go right and what I need to do to get better.

"Hopefully, by the time the Players' [Championship] and Wentworth roll around - and the US Open isn't far behind that - I want to be firing on all cylinders again."