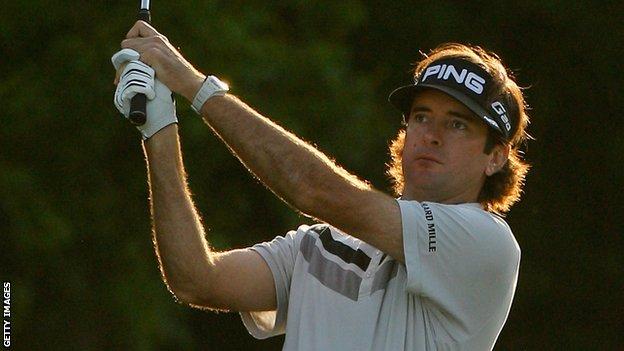 Bubba Watson carded a one-under-par 71 at the Zurich Classic on his return to action following his Masters success.

Watson won the event last year, but a mixed opening day of his defence left him six shots off pacesetters Ken Duke and Cameron Tringale.

Northern Ireland's Graeme McDowell finished three under, while England's world number two Luke Donald ended one over after a 73.

Donald needs to finish in the top seven to reclaim his world number one spot.

The 34-year-old finished his round in New Orleans with a birdie after a double-bogey on the 17th had threatened to leave him further adrift of the field.

"Very happy with my score," Watson said via Twitter. "To shoot under par was awesome!"

Duke sank seven birdies in his bogey-free round, while Tringale finished with four birdies to also shoot a 65.

South Africa's Ernie Els, Sweden's Daniel Chopra and American duo Steve Stricker and Chris Stroud are a shot behind the leaders on six under.