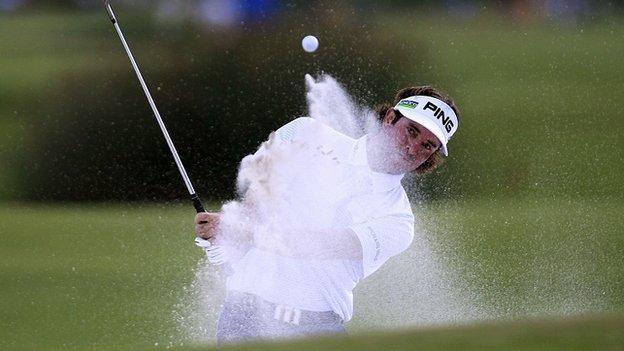 Bubba Watson escaped the cut with no room to spare in his defence of the Zurich Classic of New Orleans.

The Masters champion shot a second 71 for two under, 10 strokes off the lead of fellow American Jason Dufner.

Luke Donald, who needs to finish in the top seven to return to the top of the world rankings, fired 65 to climb to six under and six shots off the lead.

Scotland's Russell Knox and Americans Ken Duke and John Rollins were one shot adrift in second.

Knox, who resides in Florida but was born in Inverness, followed his opening-round 69 with a 64 which contained an eagle, seven birdies and a bogey.

Watson hit a spectator with his tee shot on the second hole, drawing blood from the head of 52-year-old Radd Leonard, a motorcycle shop owner from nearby Baton Rouge who came to the tournament to see Watson in his first post-Masters tournament.

"I saw it coming and it looked like it was hooking right at me. I wanted to see that big hook, you know, and I got to see it," said Leonard, who was bandaged up by paramedics and accepted a signed glove from Watson.

"I turned and ducked and it still hit me. It gave him a good bounce, anyway.

"I'll be all right. As long as I didn't black out, I figured everything was OK."

Donald rebounded from his opening 73 with a bogey-free 65, sparked by holing a seven iron for eagle on the first followed by two birdies and with further birdies at 10, 14 and 18.

"It was certainly not quite as breezy as it was [on Thursday]," said the 34-year-old. "The wind didn't really pick up until 16, so I had a good six holes without any breeze and made a couple of birdies.

"It's nice to post a low number and get back into the mix."

Seventy-nine players made the cut, with Northern Ireland's former US Open champion Graeme McDowell squeezing into the weekend at two under after a 73, while 2001 Open champion David Duval shot 69 to reach halfway three under.