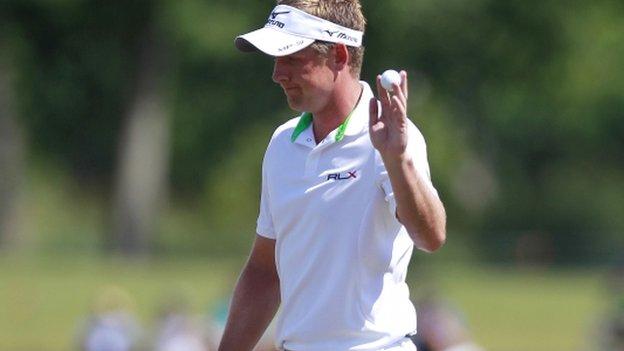 Luke Donald boosted his chances of regaining the world number one spot by hitting a third-round 66 to move up to eighth at the Zurich Classic.

The American birdied two of the last four holes in his 67 and leads Canada's Graham DeLaet by two shots on 17 under.

John Rollins and South Africa's Ernie Els are one shot further back in third.

Masters champion Bubba Watson sank seven birdies and an eagle in a seven-under-par 65 that catapulted him up to nine under, alongside Scotland's Russell Knox.

Knox had been second overnight, but carded a two-over 74 to slip out of contention.

Donald, however, remains firmly in contention to end the weekend as the world's best golfer after shooting a 66.

Donald lies behind American trio Ryan Palmer, who equalled the course record with an eight-under 64, Steve Stricker and Cameron Tringale.

Dufner, who led by one shot after the second round, extended his lead with birdies on three of the first five holes before a bogey checked his progress.

However, he picked up further shots on the seventh, 15th and 18th after leaving a 12-foot eagle putt an inch short on the last.

Dufner has not won in 163 starts on the PGA Tour and is best known for losing in a play-off to Keegan Bradley in last year's USPGA Championship.