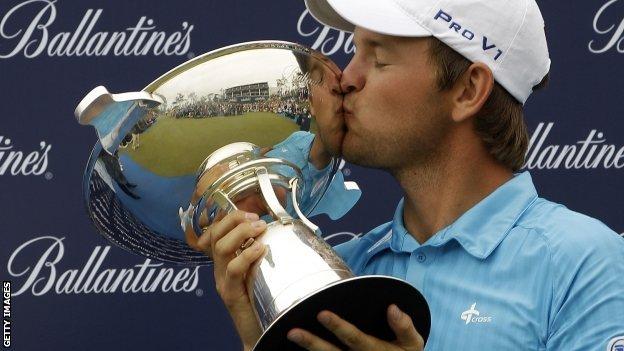 The Austrian birdied three of the last four holes to finish on 18 under, ahead of Ramsay who shot a seven-under 65 to catapult himself up the leaderboard.

It marked Ramsay's best result since winning the South African Open in 2010.

France's Victor Dubuisson fired a 66 to move up to third alongside Australian Marcus Fraser (70) on 11 under.

Wiesberger had begun the day with a five-shot lead and he punctuated a solid opening nine holes with a birdie on the par-five fifth before rounding off the tournament in style with birdies on 15, 16 and 18.

The 26-year-old, who did not drop a shot in his final three rounds, said: "I tried not to make bogeys and I did that pretty well, it was awesome.

"There was a pretty shaky moment at 12 but I made a great chip and a putt for par, but I just tried to enjoy the last three or four holes in."

England's Anthony Wall shot a five-under 67 to move into a tie for fifth with Spaniard Miguel Angel Jimenez.

Wall's compatriot, Ross Fisher, closed with a 66 to finish joint seventh alongside the Republic of Ireland's Ireland's Paul McGinley.