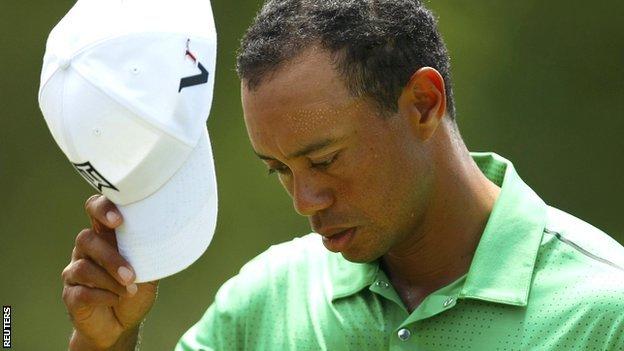 Tiger Woods missed the cut for only the eighth time as a professional after a 73 at the Wells Fargo Championship.

He finished level par for two rounds to miss the cut by a shot, while Lee Westwood (72) survived by one stroke.

But Rory McIlroy, who needs a top-seven finish to overhaul the absent Luke Donald as world number one, reached six under with five birdies in a 68.

That left him in a share of 12th place, six shots behind halfway leader Nick Watney, who is one ahead after a 64.

The 14-time major winner resumed on one under and pitched to within two feet at the 11th, his second hole, to get to minus two.

But he dropped shots at the next two holes, a par putt lipped out at the 18th and a four-foot birdie chance that stayed up at his penultimate hole proved decisive.

"It takes time to get rid of old patterns," said the 36-year-old, competing in his first tournament since he tied for 40th at last month's Masters. "It takes hundreds of thousands, if not millions, of golf balls but eventually it comes around. I've had my share of successes, and I know it's coming."

World number three Westwood dropped two shots on his first nine and had not recorded a birdie after 14 holes.

But he got up and down from the left of the green at the par five 15th to return to level par, a delicate 15-foot putt broke sharply down the hill at the 17th dropped and he safely secured par at the treacherous 18th, which features a winding stream down the left side of the fairway.

Former Masters champion Phil Mickelson dropped two shots on his back nine and also needed to two-putt the final green to make par and survive into the weekend.

The 41-year-old will be looking to repeat the performance of McIlroy in 2010, when the Northern Irishman made the cut on the number and went on to win the tournament.