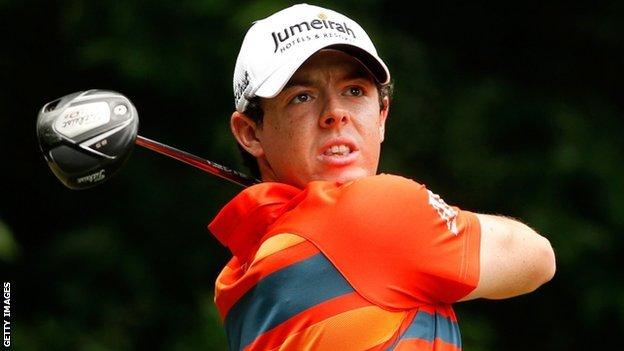 Rory McIlroy carded a fine 66 to move within two strokes of the lead after the penultimate round of the Wells Fargo Championship at Quail Hollow.

The 23-year-old, who needs a top-seven finish to overhaul the absent Luke Donald as world number one, posted eight birdies and reached 12 under.

American Webb Simpson is one shot ahead of Ryan Moore and DA Points after a third round 69 took him to 14 under.

Phil Mickelson and Lee Westwood are nine shots back after both shooting 68.

Former Open champion Stewart Cink dropped back from a share of second to a tie for sixth at the North Carolina course after a double bogey at the last.

Mickelson birdied four holes in succession on the back nine before missing a nine-foot par putt at the last, while playing partner Westwood picked up four birdies on the back nine and did not drop a shot.

McIlroy, who won the tournament in 2010 but missed the cut last year, made a scintillating start to day three with seven birdies in his opening 11 holes.

He began his charge after a fine approach to 10 feet at the first, holed a 40-foot downhill putt at the second and pitched to within three feet at the third.

After his eighth birdie of the day at the 15th took him into a share of the lead he looked as if he would claim an outright advantage when he drove 363 yards down the 16th fairway.

But after his sand iron approach found the back of the green he proceeded to take three putts and recorded his second bogey of the round.

Overnight leader Nick Watney slipped back into a share of fourth with McIlroy after driving into the creek that meanders along the left of the fairway at the final hole and finishing with a five for a round of 72.

Simpson, who recorded three top-10 finishes in his first six events this season, won twice last year, at the Wyndham Championship in August and then at the Deutsche Bank Championship two weeks later, where he beat Chez Reavie in a play-off.

He secured a slender lead into Sunday's final round after making a fifth birdie of the round when his sharply breaking downhill putt at the par-three 17th trickled into the cup.