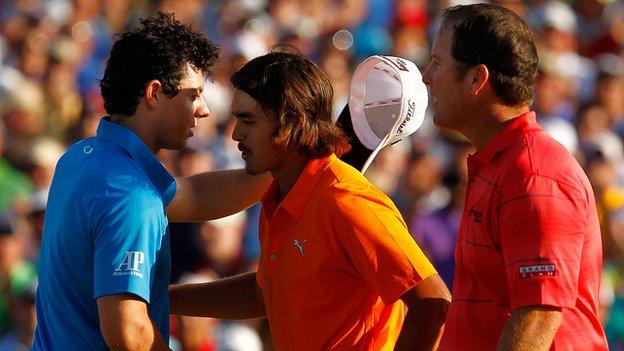 The duo tied at 14 under with DA Points and headed into a sudden-death play-off for the Wells Fargo Championship.

American Fowler, the world number 39, took the title after producing a superb approach shot at the first extra hole.

McIlroy's second-place finish was enough for him to leapfrog Luke Donald at the top of the world rankings.

"It's a little consolation," said the 23-year-old Northern Irishman. "I would rather win the tournament, but it's good.

"I want to try to play well for the next few weeks and solidify my spot at number one."

Fowler, also 23, was making his 67th PGA Tour start since turning professional in 2009.

He needed just one hole to win the play-off - sinking a four-foot putt to birdie the 18th hole, while McIlroy and Points could only par.

Fowler, who won on his 72nd attempt, said: "It's been a wait, but I'm definitely still young, and hopefully this opens the door to many more."

"It's nice to be mentioned as a PGA Tour winner."

The win brought back memories of McIlroy's first Tour win, which came at the same venue two years ago - albeit in more spectacular fashion as he finished with a course-record 62.

Fowler said of McIlroy: "We've always had a great camaraderie, been good buddies. I definitely respect him as a player, and I feel like he respects me as well".

"I've had a lot of fun playing against him."

Fowler carded the best final round of the trio, a three-under 69, but it was not the best of the day.

That honour went to Englishman Lee Westwood. The world number three was clubhouse leader for much of the afternoon after firing a fine six-under-par round of 66 to reach 11 under.