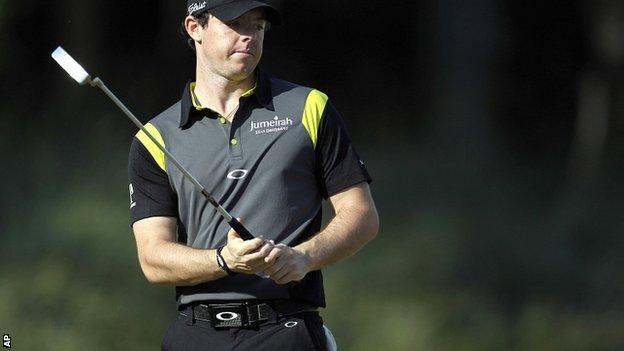 World number one Rory McIlroy is keen to improve on a chequered record at the coveted £5.8m Players Championship, which starts at Sawgrass on Thursday.

He and Lee Westwood chose to miss the event last year but both have returned.

"It wasn't one of my brightest moments," McIlroy admitted. "I'm glad to be back, it's a very big tournament and one that I'd love to win one day."

McIlroy is beginning his third stint as world number one after losing in a play-off at last week's Wells Fargo Championship in North Carolina, as American Rickie Fowler captured his first PGA Tour title.

The Northern Irishman has had only two finishes outside the top five in 15 starts since last August.

He once said of Sawgrass: "I don't like the golf course for a start. I find it very awkward off the tee. You're hitting across fairways all the time.

"It's personal preference - some guys love Sawgrass and some guys don't like it so much."

The US Open champion, who has since switched management companies from ISM to the Dublin-based Horizon, has replaced his five wood with a two iron to try to find a better way around the Players Stadium Course in golf's richest tournament.

"I'll hit it a lot off the tee just to try and keep it in play. I don't mind sacrificing distance as long as you're hitting from the fairways here," he said.

"Hitting three woods on some of these holes it still goes a little too far. I don't mind going into a green with a seven iron instead of a nine iron."

Asked about the emergence of Fowler, who is also 23, McIlroy said: "I think it was great for the game of golf that Rickie won. It's great to have characters like that that are playing well, and he engages with the fans really well, and he's a really popular player out here.

"We've known each other since playing some amateur golf together. I developed a really good relationship with him at the Walker Cup in 2007. I felt like he was the best player on that team at the time, and he was also the nicest guy."

I always find it interesting since they're not in my head

Tiger Woods, who is seventh in the world rankings, will seek to atone for last week's missed cut in North Carolina, only his eighth as a professional.

Woods won the Arnold Palmer Invitational in March but was only tied for 40th at the Masters, his worst finish as a professional at Augusta, before rounds of 71 and 73 last week.

Neither has Sawgrass been a happy hunting ground for the former world number one. Despite winning in 2001, he has had only two other top-10 finishes and withdrew injured the last two years.

The 36-year-old insists he is not panicking and says he is still trying to get used to the new swing he is working on with coach Sean Foley.

"No big deal. I've been through this before," Woods told reporters in Florida. "Actually, a lot of you guys lived it with me, went through those periods where I wasn't quite where I wanted to be. I had some pretty good runs after that, and this is no different. It takes a little bit of a time, and I keep building and things eventually come around to where they feel natural and efficient."

Woods also had a dig at a number of pundits, particularly Sir Nick Faldo, who questioned his self-belief.

"I always find it interesting since they're not in my head," said Woods, who has been drawn with Fowler and Hunter Mahan for the first two days.

"They must have some kind of superpower I don't know about."

Another former Masters champion Phil Mickelson, inducted into the Hall of Fame this week, is also in contention for a title he has won once before, in 2007, and will play alongside McIlroy and Steve Stricker in the opening two rounds.

Reigning Masters champion Bubba Watson is absent after deciding to take a month away from the game to spend time with his wife and adopted baby son.