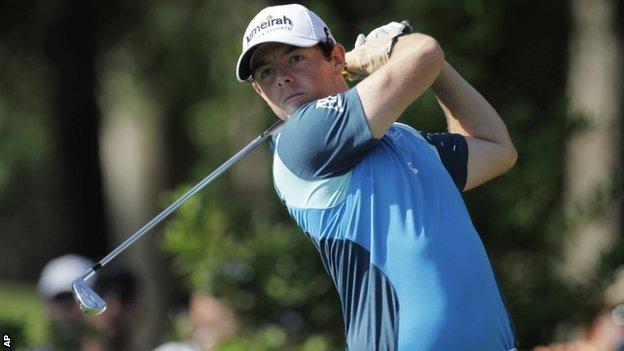 World number one Rory McIlroy suffered more Sawgrass misery as he crashed out of the Players Championship in Florida.

Northern Ireland's McIlroy missed the halfway cut for the third time in three visits after a four-over-par second-round 76 left him on four over.

"There's something about this course I can't quite get to grips with," said Mcllroy. "It's disappointing."

American trio Matt Kuchar, Zach Johnson and Kevin Na are at the top of the leaderboard on eight under.

Johnson carded the lowest round, with eight birdies in his six-under 66, although a bogey on the last stopped him holding the lead on his own.

Na started the back nine with three successive birdies to lift himself into contention while Kuchar picked up three shots in five holes as he closed with 13 bogey-free holes.

Former world number one Tiger Woods was in danger of missing the cut until he put together a run of four birdies from the eighth hole, as he reached halfway alongside Phil Mickelson on two under.

"I was trying to shoot my number today," said the American after a four-under 68, ended a run of nine rounds without shooting in the 60s.

"Sixty six was my number. I figured that would have been a good way to go into the weekend, being probably four or five back. But I'm still in with a good chance."

England's Luke Donald improved on his opening round of 72 with a second round of 69 to move to three under - the same mark as compatriots Lee Westwood and overnight leader Ian Poulter.

Donald, who started on the 10th hole, eagled the 16th and second, first hitting a five-iron to six feet and then making a 20-foot putt, but then undid some of his good work before a closing birdie on the ninth.

"It could have been a special round," said Donald who will replace McIlroy as world number one if he finishes in the top four. "I threw in a couple of bad swings, but 69 is not a bad score.

"I am quietly optimistic. I think this course is only going to get tougher and eight or nine under could be a good score come Sunday."

Westwood, who will return to world number one if he wins the tournament, said: "I didn't play as well as Thursday, but I'm shot one better off - that's golf.

"I'm playing all right. I like this course and it suits me.

"I suppose three under is in touch. Hopefully it will firm up and the greens will get quicker."

Poulter fell away after a four-over-par 76 that featured two double bogeys in his opening four holes.

Scotland's Martin Laird, who led with Poulter overnight, maintained his position at the top of the leaderboard until the closing three holes.

But he found the water with his second shot on the par-five 16th and then hit a poor tee shot to the island green on the short 17th to find the same lake.

Those errors cost him a bogey six and a double-bogey five, and his misery was complete when he left a chip well short on the last and bogeyed again to drop from 10 under to six under - two behind the leaders.

"A nine iron was too much and a wedge not enough, but I didn't hit it real solid and the wind got it. It was a bad shot.

"But I'm still well in it. I'd have taken my position before the start."

Brian Davis is now the highest-placed Englishman on six under after he mixed five birdies with three bogeys in his 70 to move into a tie for fifth on six under.