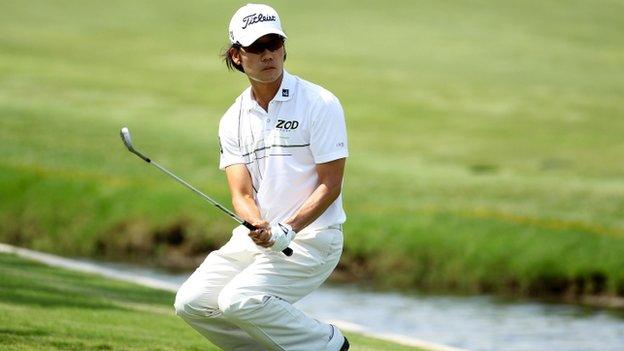 Controversial American Kevin Na will take a one-shot lead into day four of the Players Championship at Sawgrass.

Na struggled for confidence over his ball, taking repeated practice swings and backing off numerous times, but ended with a birdie for a round of 68 and a 12-under total.

Matt Kuchar was two clear but found the water on 17 and ended second after a 69, with Rickie Fowler (66) nine under.

Brian Davis and Martin Laird lead the British charge on six under.

Na, who is looking for his second PGA Tour title, was given a slow play warning by tournament referees over the length of time he was taking before shots with a ritual which included a remarkable number of practice swings before striking the ball.

At last year's Texas Open Na took 16 at one hole and on Saturday he repeatedly apologised to playing partner Zach Johnson for keeping him waiting.

Despite the problems, Na's golf was often stunning but he admitted afterwards he was struggling with his balance over shots.

"There's a lot going on and I know the whole world's watching," he said. "It's really frustrating for me and I'm screaming at myself to pull the trigger.

"All I can do is my best. After backing off once I almost feel like I'm cornered. It's a tough situation but I'm working on it and it's getting better. Hopefully it will go away by the end of the year."

Na and Kuchar had led at the halfway stage with Zach Johnson, who bogeyed the second and then fell back to seven under after dropping further shots at the 14th and 18th.

Fowler, who beat Rory McIlroy in a play-off at last weekend's Wells Fargo Championship for his first PGA Tour victory, was joint 17th after the second round but picked up six shots in his first 11 holes despite the blustery conditions.

He picked up another at the 16th but three-putted from off the final green.

England's Davis and Scotland's Laird, who are both based in America, shot level-par 72s to remain on six under.

"After the way I started I will take level par. It was extremely tough early on and I hit some bad shots," conceded Laird.

Davis echoed Laird's comments, saying: "The first six or seven holes were really hard. I'm extremely disappointed with the finish, though. I didn't putt well and will go and work on that."

Luke Donald and Lee Westwood were playing together for the third day in a row, but their hopes of usurping Rory McIlroy, who missed the cut, as world number one faded.

Donald, who needs a top-four finish, had a level-par round and remains on three under while Westwood, who needs to win the tournament, is two shots further back on one under after bogeying the fourth and fifth and failing to make a single birdie in a 74.

After battling back from two over to two under on Friday, Tiger Woods's hopes of victory virtually disappeared after he also had a level-par 72.