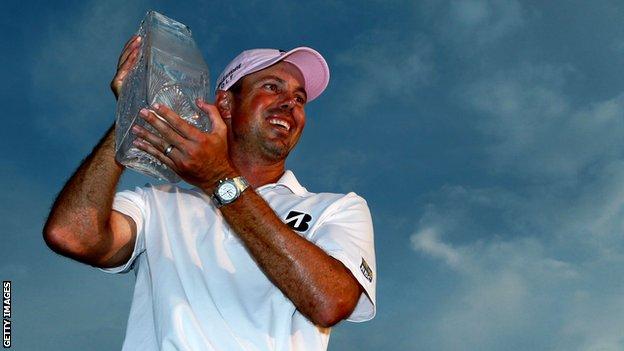 American Matt Kuchar held his nerve on a tense final day to win the Players Championship at Sawgrass by two shots.

The 33-year-old, who started the round one shot behind leader Kevin Na, dropped a shot at the opening hole but hit four birdies for a 13-under total.

Luke Donald, needing a top-four finish to take over from Rory McIlroy as world number one, finished sixth.

Donald had started the final round back in 27th, eight shots behind Na, but battled hard with a round of 66 for a nine-under total.

He also equalled the record for golf's richest event, with a back-nine 30 containing six birdies.

Kuchar, whose last win came in the 2010 Barclays Championship where he beat Laird in a play-off, saved a shot with a gutsy par putt at the third and then came close to an eagle at the fourth, but had to be content with a birdie. He then hit a lovely approach to the ninth, leaving him with a relatively easy putt before another birdie at the 12th.

He picked up another shot at the 16th, and not even a dropped shot at the 17th could halt his charge as he claimed the biggest win of his career to move up to third in the US Ryder Cup standings.

"You think of this as one of the strongest fields in golf," Kuchar said. "To come out as the champion is just an amazing feeling.

"I think one of the things that strikes me is walking through the champions' tunnel every day. I can't help but stop and gaze at all the photos going through champions' tunnel, and to think I'm going to be a part of that with Jack Nicklaus, Lee Trevino, Raymond Floyd, Phil Mickelson, David Duval and Tiger Woods - it's all the best of the best.

"To feel like I'm going to see my picture up there next year is pretty cool."

Na, who had birdied the 18th to take a one-shot lead into Sunday's final day, was battling with his swing and he also struggled on the greens, dropping four shots in the space of five holes from the fifth to see his challenge disappear and he ended up with an eight-under total.

Laird went out in 33 with birdies at the second, seventh and ninth then went into the joint lead with Kuchar thanks to a hat-trick of birdies from the 11th.

But errors at the 14th and the long 16th, as well as the bogey at the 18th, left the 29-year-old Glaswegian two shots behind Kuchar.

Laird said: "I'm obviously very happy with how I played today. That's one of the best rounds I've ever played under the circumstances, and the conditions."

Lee Westwood had also had an opportunity to finish the week as number one following McIlroy's missed cut, but the win he needed never looked likely for long before he closed with a 77.

It left Westwood four over and down in 60th place, while another disappointing tournament for Tiger Woods ended with him scoring 73 for one under and he was outside the top 30 for the third event in a row.