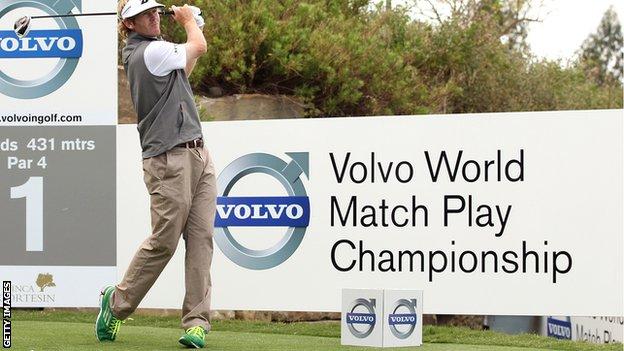 American Brandt Snedeker needed to borrow clubs as he beat Thomas Bjorn on the opening day of the World Match Play Championship in Finca Cortesin, Spain.

Snedeker's bag went missing en route from Florida and he was on the fourth tee when he was reunited with them.

The American was three holes ahead by that point and went on to a 5&4 win.

The 24 players in the field have been drawn into eight groups of three.

Each group will play in a round-robin format and the top two players from each group advance to the last 16, when the tournament reverts to a conventional knockout format.

Under the rules Snedeker, who also had to begin his round wearing his training shoes, was allowed only to add four clubs to those he had started with, but was so happy with the driver he had borrowed from Australian Senden and the putter he had chosen in the pro shop that he continued with them.

"The driver worked really well, so I think it's mine now and no longer his," the American quipped.

Bjorn, who has been suffering from a virus and pulled out of the last two events in America, bogeyed the first three holes and was five down after six.

Scot Paul Lawrie started his 500th European Tour event with a 2&1 victory over the higher-ranked Hanson, winning the 16th with a par to go one-up and then making a birdie from five feet on the next after his six-iron tee shot kicked off the bank on the right of the green.

There was also one halve, last year's Masters champion Charl Schwartzel making a birdie on the last to square his match with last year's semi-finalist Nicolas Colsaerts.

Kaymer lost 3&2 to Dubai Desert Classic winner Rafael Cabrera-Bello and Spain's other winner was Sergio Garcia, who came from behind to beat compatriot Alvaro Quiros.