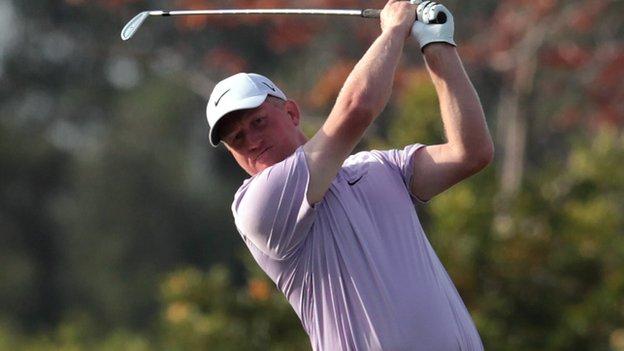 Finch, ranked 218 in the world, recorded a one-hole win over the number one seed to become the seventh UK player to reach the second round.

But Open champion Darren Clarke has gone out.

Clarke, who has failed to survive a halfway cut this season, lost twice on Friday, by two holes to Rock and 6&4 to Rose.

After Poulter defeated Senden on Thursday, a half for Lewis would have have been enough to send Poulter through.

Lewis, the 21-year-old who led the Open as an amateur last year, did better than that, but had to go to the final green to secure victory.

Poulter then prevailed 4&3 when the pair met in the afternoon.

Lawrie, playing in his 500th European Tour event, got the half he needed against Camillo Villegas, while McDowell, who beat Robert Karlsson on Thursday, triumphed 4&3 over Jbe Kruger.

Sergio Garcia, Thomas Bjorn and Retief Goosen were amongst those who also made the weekend.