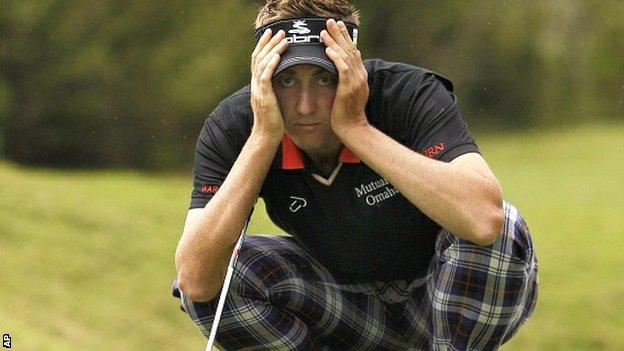 Holder Ian Poulter and Justin Rose were knocked out of the World Match Play in the group stages as all five English players fell short of the last eight.

Spain's Alvaro Quiros saw off Poulter with a 4&3 win, while Rose lost by the same margin to Nicolas Colsaerts.

Scot Paul Lawrie thrashed Thomas Bjorn 5&4 however to advance to a quarter-final with Retief Goosen, while Graeme McDowell will face Sergio Garcia next.

I'm 15 under for three rounds and going home. Unfortunately that's the way the tournament is

McDowell, the highest seed left in the competition after Rose's exit, saw off Finch 3&2, while Garcia ended Lewis's challenge with a 4&3 victory and Goosen saw off Rock 3&2.

Poulter refused to blame the defeat on the second day when a buggy driver drove over his foot. He said: "I don't need excuses. I had plenty of chances and didn't take them - simple. I just didn't play well enough."

Discussing his exit, Rose said: "I actually boxed a good fight, but I ended up in the cuts room getting stitched up - Nicolas was seven under through 15 holes.

"I'm 15 under for three rounds and going home. Unfortunately that's the way the tournament is."

Lawrie's success helped him step towards a possible Ryder Cup return. Bjorn bogeyed the first two holes and by the eighth had had three more.

The Scot said: "Thomas obviously didn't play his best. I did what I had to do and played very solid."

The quarter-final line-up was complete when Rafael Cabrera-Bello came from behind to beat Swede Robert Karlsson - a late stand-in for the injured Paul Casey - by getting up and down from a bunker on the last.

It meant an all-Spanish clash with Quiros for a spot in the last four.