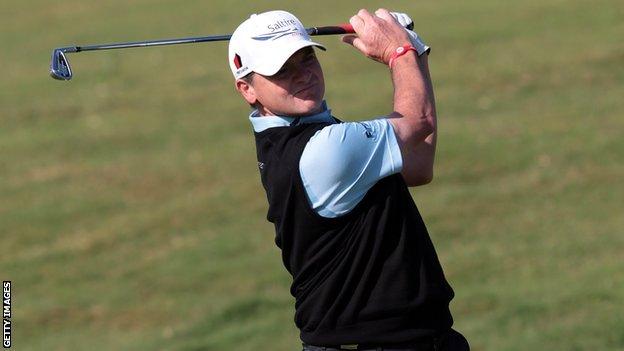 For the players jetting into Wentworth after chasing the winter sun for months around the world it may seem strange to be playing a tournament viewed as the season's curtain-raiser.

After all, the 2012 European Tour began back in January. But the BMW PGA Championship has always been seen as the start of the golfing summer.

"This tends to be the start of the bigger tournaments," explained Paul Lawrie, who is tipped to do well this week.

"We've obviously played in some big ones in the Middle East but this is the real start."

With conditions forecast to be hot and sunny all week, Wentworth should be picture perfect. And a stellar cast have assembled all hoping to shine.

Donald tees off as defending champion but his victory 12 months ago is one of the few occasions that a favourite has prospered.

A good example of the sort of surprises that the European Tour's flagship event can throw up came back in 2004.

That year the title was won by a record score of 19-under par. The winner? Scotland's Scott Drummond.

His victory was the fifth time in seven years that a Scot had conquered Wentworth. Colin Montgomerie's hat-trick of titles (1998, 1999, 2000) and Andrew Oldcorn (2001) the others. So what chance of another Scottish victory this year?

Thirteen tee off with saltires on their bag, although form suggests that the majority will be lucky to feature at close of play on Sunday.

While Monty is a three-time winner here nobody really expects him to mount a challenge. His mood around the practice green on Tuesday, when he backed out of a pre-arranged interview, probably gives us a clue about where his game is.

Stephen Gallacher has two runner-up spots to his name so far this season but a recent sinus problem has robbed him of fairway time.

Lawrie and Martin Laird do carry genuine chances. Both are enjoying superb seasons with the 1999 Open winner in particular seemingly re-born as a golfer.

His victory at the Qatar Masters has been followed by four top-10 finishes. His disappointment at only finishing third at last weekend's World Match Play speaks volumes for the 43-year-old's appetite right now.

He sits eighth in the Tour rankings and comfortably occupies a place in Jose Maria Olazabal's Ryder Cup team for Chicago.

"The main goal is always to come away with the winner's cheque," the Aberdonian told BBC Scotland.

"But sometimes expectations can pull you back down. You get on a good run and expect just to turn up and do well but there are too many good players on this Tour to do that."

Laird desperately wants to impress Olazabal. The American-based Glaswegian has joined the European Tour this season to do just that and Wentworth is the start of a crucial period for the 29-year-old.

In the next few weeks he'll play in the Irish, French and Scottish Opens not to mention The Open at Royal Lytham with the hope of forcing his way into Ryder Cup contention.

"I wouldn't say I'm expecting to win but I've got confidence and I'm looking to be in contention," said Laird, who is making his Wentworth debut.

"I've always wanted to play this event and this year it just opened up perfectly for me to come over. It's a great course and I feel like I could do well here.

"But I can have a great year and still not make the [Ryder Cup] team, that's how strong European golf is right now."

Of course, the big three of McIlroy, Donald and Westwood are the ones to beat but this championship has a habit of throwing up a surprise or two.

We've already had that with the glorious weather on display that is forecast to last throughout the week. Home-from-home for those who have travelled the world playing in the winter sun.