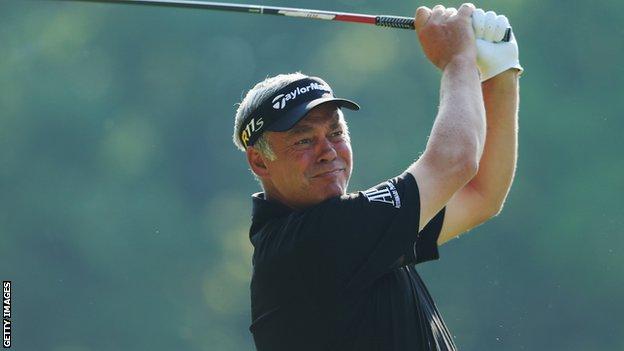 Darren Clarke's miserable run of form continued as a second-round 77 at Wentworth left him short of the cut mark at the BMW PGA Championship.

The Open Champion was in position to make the cut as he stood at two under at the turn but a double bogey on 10 was followed by four more bogeys.

That left him on four over, one shot worse off than Graeme McDowell, who also fell short of the cut mark..

Gareth Maybin is tied for 17th place on four under after two rounds of 70.

In an eventful second round, the Ballyclare player posted an eagle, five birdies and five bogeys.

Maybin was the only Northern Ireland player to make the cut as Michael Hoey ended five over following a 76 and Rory McIlroy was well short of the cut mark on nine over.

James Morrison who made the most of the better morning conditions to fire a 64 which left him on 12 under and four ahead of Luke Donald and David Drysdale.

Peter Lawrie was the leading Irishman on seven under after posting a 71 on Friday.

Kerryman David Higgins is also having a good tournament and is four under after two 70s.

Damien McGrane made the cut on one under after a 72 while Paul McGinley [71] was also safe on level par.