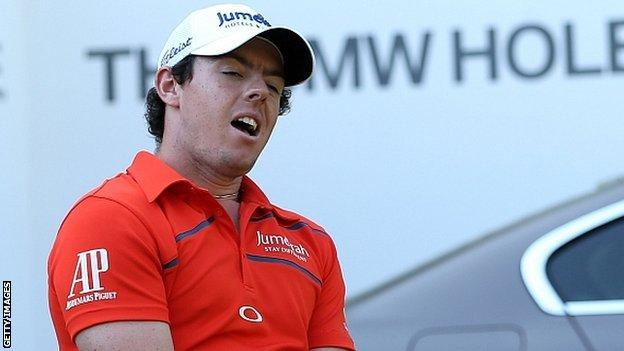 Rory McIlroy missed his second straight cut after a woeful two days at the BMW PGA Championship at Wentworth.

The world number one carded rounds of 74, 79 to end nine over, three weeks before his US Open title defence.

England's James Morrison raced into the lead at 12 under with a stunning 64.

Defending champion Luke Donald, who can overtake McIlroy in the rankings with a top-eight finish, and Scotland's David Drysdale were four back in second, while Lee Westwood was one over.

The 23-year-old McIlroy missed the cut at the recent Players Championship in Florida but instead of a one-off blip his problems deepened during a nightmare stretch beginning with a double bogey at the eighth on a sun-soaked day in Surrey.

The Northern Irishman then leaked five straight bogeys and a double bogey on the 15th to plummet down the leaderboard and miss his first cut on European soil since the Johnnie Walker Championship at Gleneagles in August 2008.

"I think I may have taken my eye off the ball a little bit, maybe not practising as hard as I had been," he said.

"It's been a week I'd like to forget. It's not nice to play like this and not nice two weeks in a row. Maybe it's a good thing I have two days off to practise and I'm looking to getting back to the States next week.

Compatriot Graeme McDowell, the 2010 US Open champion, also missed the cut after finishing with three straight bogeys the day after receiving a two-shot penalty for inadvertently moving his ball.

Morrison, the 2010 Madeira Open winner, made six birdies before rolling in a 30-foot putt for an eagle on the 18th and the second best 36-hole score in the tournament's history. Paul McGinley was 13 under at the same stage in 2008.

"When does loss of form become a slump and when does a slump become a crisis? With McIlroy we are in the loss of form phase. The unravelling of his second round at a windswept Wentworth was alarming and shows he still lacks an ability to handle windy conditions and staunch the bleeding when things go wrong. He needs to bounce back soon and after consecutive missed cuts the world number one will be under pressure when he tees off at the Memorial Tournament next week. It is his final competitive outing before the defence of his US open crown next month."

"I desperately, desperately want to keep going forward and that is my problem sometimes - I am too keen," said Morrison, who played in the same England age-group cricket sides as current internationals Alastair Cook, Tim Bresnan and Ravi Bopara.

"I am going to be trying my hardest to win. This is my third year on tour and I have won but this is a different level.

"But that was one of the best rounds I have played and probably one of the easiest, or it felt easy. I wish golf was like that every day but it isn't."

Donald, who beat Westwood in a play-off last year to become world number one, dropped a shot at the first but made five birdies and an eagle in pursuit of Morrison.

"It is a great opportunity for him - any aspiring golfer would want to get into this situation and see how they deal with it," said Donald.

"This is the biggest event on the European Tour. I am sure he will have some nerves and I will try and chase him down."

Ireland's Peter Lawrie, the co-first-round leader with Drysdale, shot 71 for seven under alongside Spain's Alvaro Quiros (70), while England's Justin Rose ended in a large group at six under after a round of 71.

Open champion Darren Clarke has yet to make a halfway cut this season. He shot a second-round 77, coming home in a six over par 43 after being comfortably on course to make it through to the weekend.