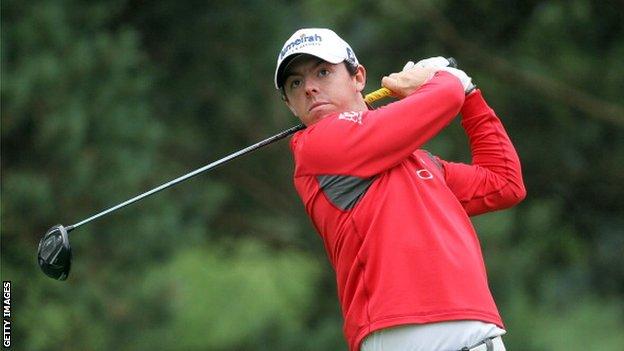 Rory McIlroy says he is racing against time to sort out his game before the start of the US Open after missing his third straight cut.

US Open champion McIlroy carded a miserable seven-over par second round at the Memorial Tournament as Tiger Woods eased into contention.

Woods is one stroke behind second-round leader Rory Sabbatini but McIlroy's round did not include a single birdie.

With the Northern Irishman set to begin the defence of his US Open title on 14 June, McIlroy has missed cuts at the Players Championship and the PGA Championship.

"I'm definitely hitting the ball better than I did last week, so I can see an improvement there," McIlroy added after his latest early exit.

McIlroy finished the first round at Muirfield Village in a share of 20th on one under.

But his poor form continued in the second round with two bogeys on the front nine, before doubles at the 11th and 14th, together with a further dropped shot at 13.

"I hit some good shots, it just seems like, every time I go out there, I make one or two big numbers and that sort of throws me," McIlroy said.

"Those big numbers at the beginning are killing me. I just need to get those off the card and I'll be OK."

For Woods it was a different story as his 69 saw him finish the day five under, one stroke behind second-round leader Sabbatini from South Africa.

Woods hit five birdies in his round and it could have been even better but for a double bogey on the par-three 12th.

Woods predicted the field would stay bunched up, telling the PGA Tour website: "The guys aren't going to go out and shoot a bunch of low rounds out here.

"This golf course is hard. The pin locations for tomorrow are going to be difficult. It is going to be another good test."

England's Greg Owen is one under, one shot ahead of compatriot and world number one Luke Donald.

44 comments
Back to top
unknown