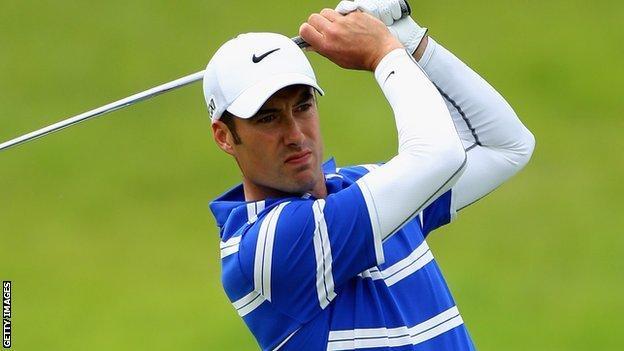 Englishman Ross Fisher stayed in contention at the Wales Open despite being hampered by a toe injury during the third round at Celtic Manor.

Fisher opened up a two-shot lead on Friday, but stubbed his toe at his hotel that night.

He struggled off the tee on Saturday, carding a level-par 71 to end on six under, one shot behind leader Thongchai Jaidee of Thailand.

Joost Luiten shot a 64 to share second place with Fisher.

"There were a few expletives and it was extremely painful," said Fisher, who was part of the Europe team that won the Ryder Cup at Celtic Manor in 2010.

"I couldn't put any weight on it and half-contemplated playing in trainers. One of the toes is as purple as anything. I iced it and two of the toes were strapped together, but I hit it everywhere and I'm glad to finish."

Despite his troubles, Fisher managed five birdies, but they were cancelled out by five bogeys to allow former paratrooper Jaidee to take over at the top of the leaderboard.

Jaidee, the world number 199, finished with a birdie at the par-five last after a drive that measured 410 yards.

Fisher's playing partner Lee Slattery, two off the lead at halfway, put two balls in the water for a quadruple bogey seven on the third, eventually finishing with a 76 to end on one over.

Scotland's Paul Lawrie, second in the Ryder Cup standings, carded a 71 to finish level with Slattery.