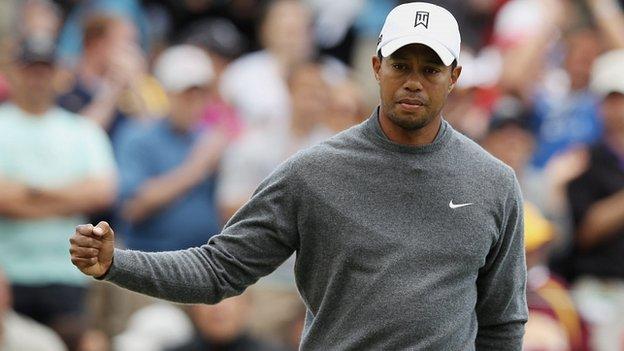 Tiger Woods remained in contention for a second title of the year after ending the third round four shots adrift in the Memorial tournament in Ohio.

Woods carded a one-over 73 at a windy Muirfield Village to end four under as Spencer Levin hit 69 for eight under.

South African Rory Sabbatini (71) was seven under, while Rickie Fowler shot 69 to end five under and will partner Woods in the final round.

"I had my opportunities but I didn't do it on the back nine," said Woods.

"I missed a few putts but I'm still in the ball game. Anything can happen around here."

Should Woods win his fifth Memorial event on Sunday, he would equal tournament host Jack Nicklaus's record of 73 victories on the PGA Tour.

"I've still got a lot of work to do, I can't look at it like that," said Woods, who was feeling unwell before his round but briefly led on his own early on. "I need to grind it out and obviously post a good number."

The 14-time major champion, who won Arnold Palmer's Bay Hill Invitational in March to end a 30-month title drought, could not quite match the precision of his second-round 69.

Despite going out in 34 with birdies on the first and seventh, the former world number one dropped four shots on the way home, with a solitary birdie at the 13th.

The excitable Levin, 27, chipped in for an eagle and for a birdie, but dropped shots at the 12th and 16th and escaped with a 14ft par save on the 17th as he chases a first PGA Tour win.

Sabbatini has won six times on the PGA Tour, most recently at last year's Honda Classic, while Fowler beat Rory McIlroy in a play-off for his first PGA Tour title in early May and was second the following week at the Players Championship.

World number one Luke Donald amassed a 75 to end three over alongside fellow Englishmen Brian Davis and Greg Owen, while Justin Rose was level par.