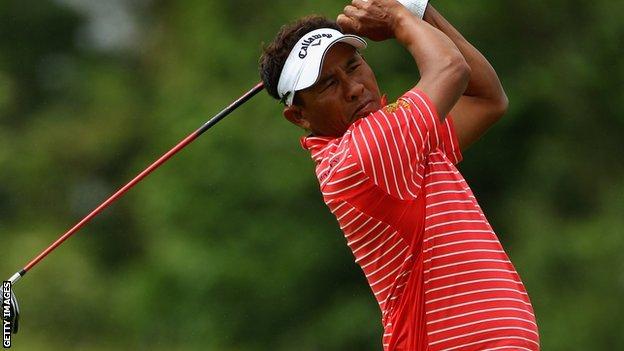 Thailand's Thongchai Jaidee hung on to take victory at the Wales Open, as Ross Fisher's challenge faded after he was penalised for slow play.

Fisher was one shot off the lead when he was adjudged to have taken too long over shots on the 11th and 14th holes.

He was given a one-stroke penalty and eventually finished tied for sixth, two shots behind Jaidee's six under par.

Jaidee's one-over round of 72 was good enough for him to win by one from a group of four players on five under.

England's Fisher, part of the European team that won the Ryder Cup on the same course two years ago, was a shot further back, level with Ireland's Paul McGinley on four under.

Former paratrooper Jaidee, who had led by one shot overnight, struggled on the front nine, his 39 shots including a double bogey at the par-five ninth, where he went out of bounds before finding a bunker.

But he holed four birdies on the back nine, and could even afford to bogey the last to claim his first win in Europe.

He might have come under more pressure from Fisher, who learned of his punishment with four holes left to play.

Then, on the par-five 11th, Fisher took 57 seconds over his second shot, rather than the permitted 40.

"It was a clear bad time," said Paramor. "Then on the 14th green he took 55 seconds over his first putt.

"I told him before he teed off at the 15th - and I don't think he was particularly happy."

Fellow Surrey player James Morrison was also in trouble with officials after comments made on Twitter.

The 27-year-old, who led the PGA Championship at Wentworth last week, wrote after his third round: "Thanks Celtic Manor. Dump. One more round then can't get over that bridge quick enough."

He apologised after finishing the tournament in 57th place, saying: "Celtic Manor do a great job for our tour and have a great venue.

"Us as players our very grateful for all the support. Very sorry for comment. Really want to apologise - I was very hot when I finished and didn't mean it in that context. Sorry to all involved."

Tournament director Mike Stewart said: "We have spoken to the player, who has expressed his sincere regrets about the nature of his comments on Twitter.

"The European Tour will be taking disciplinary action against the player."