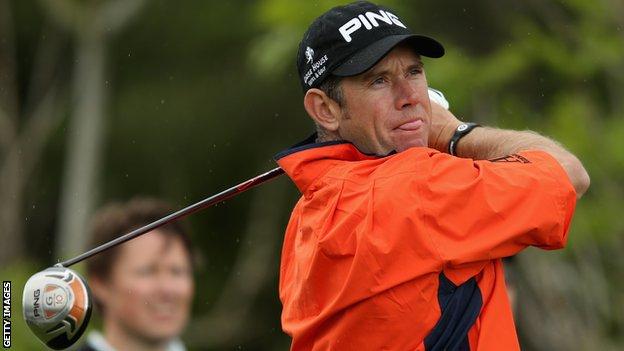 Lee Westwood holds a three-shot lead at the Nordea Masters after a flawless second round in Stockholm.

The world number three registered eight birdies as he carded 64 to take control at the event's midway point.

World number 22 Sergio Garcia is tied for 13th on six-under after carding 69.

Overnight leader Magnus Carlsson is seven-under, five shots off the lead after the Swede went round the Bro Hof Slott course in level par.

Westwood finished his round in style, with birdies in the last three holes as he stepped up his preparations for next week's US Open in San Francisco, the second major of the year.

"I think in the morning the greens are easier," he said. "I deserved a 64. You have to be precise around this course. It's nice to be able to play well and put on a bit of a show."

Saltman, ranked 512 in the world, enjoyed a rare albatross at the par-five 12th, while Hanson, who won the event in 2008, was left to rue a double bogey at the 11th.