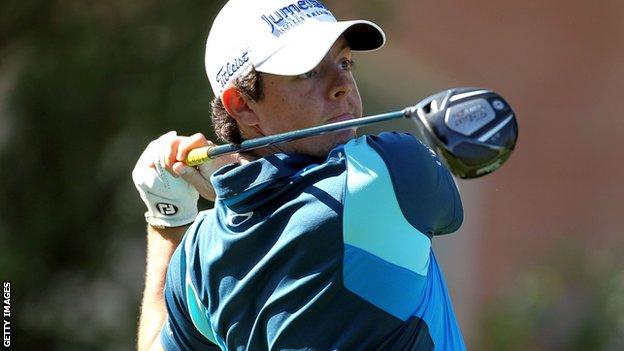 Rory McIlroy produced a timely return to form before his US Open title defence next week by shooting an opening two-under-par 68 at the St Jude Classic in Memphis.

It left him two shots behind leaders Jeff Maggert and John Merrick.

The Northern Irishman moved to three under after 10 holes but slipped back as he struggled with his long game.

Padraig Harrington matched McIlroy's 68 but Graeme McDowell is nine shots off the lead after an opening 75.

The 23-year-old hit only nine greens in regulation and missed more than half of his fairways but an excellent putting performance rescued him.

He twice saved par by holing out from more than eight feet and also holed birdie putts of 16 and 10 feet.

McIlroy, who played alongside compatriot McDowell and Irishman Harrington, said: "I felt like that was about the best round of golf I played in a while, though it could have been a lot better.

"The scoring doesn't look too good, so I am off to a decent start. There are a lot of good signs out there."

2010 US Open champion McDowell, who, like McIlroy, started at the 10th, dropped to four over after eight thanks in part to a double bogey at the 15th.

He dropped further shots at the fourth and seventh and his only birdie came at the closing hole.

Harrington produced a much steadier round of three birdies and a solitary bogey.

SY Noh, Arjun Atwal, Jeff Overton and JJ Henry were a stroke ahead of McIlroy after going round in 67.

McIlroy and Harrington were joined on two under by eight other players, including two-time major winner John Daly.