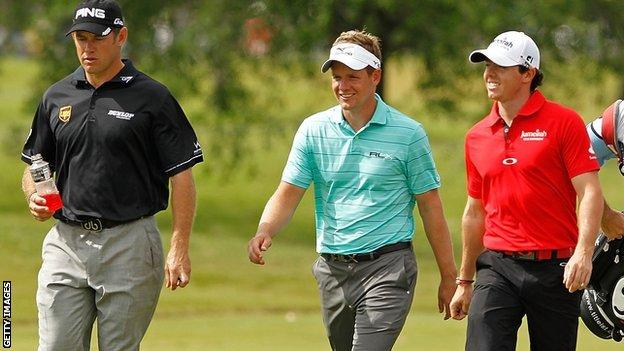 Defending champion Rory McIlroy has been grouped with English pair Lee Westwood and Luke Donald for the US Open starting next Thursday.

Donald and Northern Irishman McIlroy have traded the world number one spot several times this year, while Westwood remains at three in the rankings.

Woods and Mickelson have not been paired at a major at the 2008 US Open, the last of Woods's 14 major titles.

World number four Woods is now favourite to add to that total at the Olympic Club in San Francisco after he won his fifth Memorial Tournament this month, equalling Jack Nicklaus's total of 73 PGA Tour titles in the process.

McIlroy comes into the defence of his first major on the back of a run of three straight missed cuts, although he is looking to recover his form at the St Jude Classic in Memphis this week.

He will tee off at 20:29 BST in Thursday's first round, while the American trio of Woods, Mickelson and world number five Watson get under way earlier in the day at 14:33 BST.

Ernie Els, Geoff Ogilvy and Angel Cabrera, all former winners, will also play together, while world number six Matt Kuchar - who won best amateur the last time the tournament was hosted at the Olympic Club in 1998 - will tee off with fellow American Steve Stricker and England's Ian Poulter.