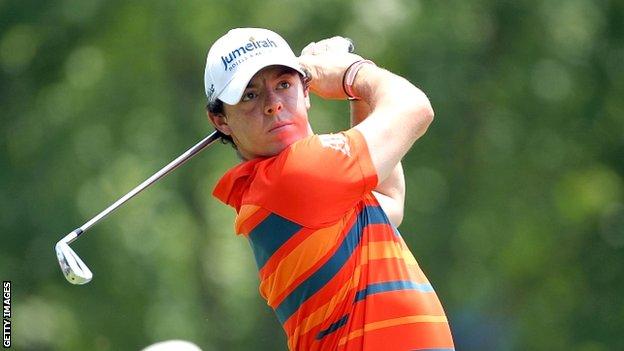 Rory McIlroy's resurgence continued as a round of 65 gave him a one-shot lead at seven under par after two rounds of the St Jude Classic in Memphis.

The 23-year-old, who has missed the cut in his last three tournaments, birdied three of his final four holes.

Irishman Padraig Harrington is three shots off the pace in a share of eighth place after a second successive 68.

But the former Masters champion Zach Johnson and 2010 US Open champion Graeme McDowell both missed the cut.

McIlroy, who defends his US Open title at the Olympic Club in San Francisco next week, had missed cuts in three successive high-profile tournaments, the Players Championship at Sawgrass, the PGA Championship at Wentworth and last week's Memorial Tournament.

However, after an opening-round 68 in Memphis, he began day two with an eagle at the third and, although he dropped shots at the 12th and 13th, he went close to a second eagle when his putt from inside four feet at the 16th lipped out of the cup.

The Northern Irishman's driver was working well, and after a tee shot of 329 yards at the 18th, a pitch from 115 yards finished five feet from the pin and resulted in his fifth birdie of the day.

"The goal this week was obviously to see some improvement, to get some competitive rounds and get into contention and I'm right there heading into the weekend," he said. "It's nice to see my name on that part of the leaderboard. It's not nice when you're struggling to make the cut on a Friday afternoon.

"It's nice to be through to the weekend obviously. It's obviously even nicer to be leading and have a great chance. It's going to be a great experience and a great way to prepare for the US Open next week. I'm happy with how I'm playing and with how I'm controlling the golf ball."

Three-time major winner Harrington, who is without a title since the Johor Open in Malaysia 2010 and has not won on the PGA Tour since his PGA Championship triumph in 2008, mixed five birdies with three dropped shots.

But McDowell, who has also not won since 2010, added a 73 to his opening 75, with three bogeys in four holes from the 14th, to miss his first PGA Tour cut of the season.

JB Holmes produced the best round of the day with a 64, and is one of three Americans one shot off the lead.

The long-hitting 30-year-old, who had brain surgery last year, raced to the turn in 29 with six birdies to raise hopes of a sub-60 round, but from there he could only manage one more birdie and one bogey to come home in 35.