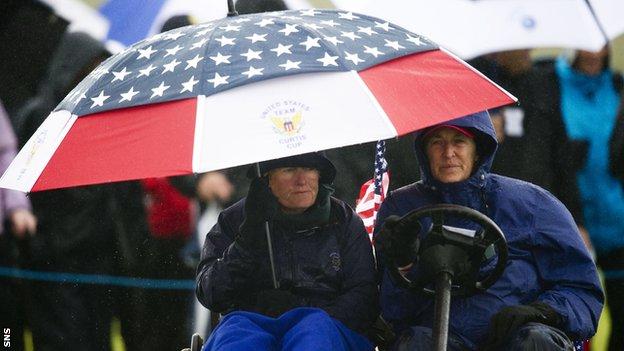 The United States will take a one point lead into the final day of the Curtis Cup at Nairn Golf Club as they lead Britain & Ireland 6.5-5.5.

The visitors extended their overnight advantage by winning two of the morning foursomes in cold and wet conditions.

But the hosts, aiming to end a run of seven consecutive defeats, hit back to take two-and-a-half points from the three afternoon fourballs.

Stephanie Meadow and Pamela Pretswell closed out the final match two up.

US captain Pat Cornett, nursing a broken ankle she sustained in an accident on Friday, watched her team carry on their good work from the opening day as they moved into a 6-3 lead; Amy Anderson and Tiffany Lua and Austin Ernst and Brooke Pancake prevailing.

The hosts were in danger of losing touch ahead of the final day singles but rallied superbly in the later session.

All three fourballs were tight affairs but Holly Clyburn and Kelly Tidy got a vital point on the board for Britain & Ireland in the first tie and Leona Maguire and Bronte Law shared the honours with Brooke Pancake and Austin Ernst.

Meadow and Prestwell then won the last two holes of their match, much to the delight of the Scottish crowd.