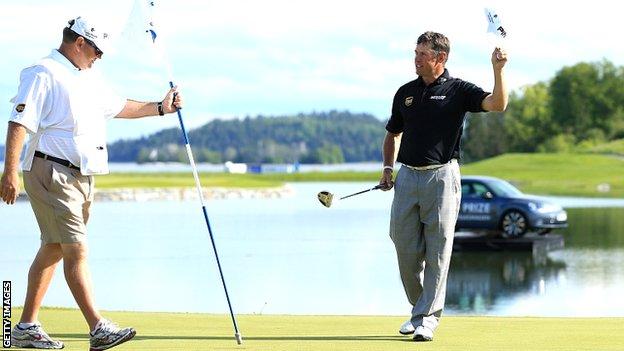 World number three Lee Westwood is hopeful of his first major and a third successive win for a UK golfer at the US Open, starting on Thursday.

The 39-year-old, who finished second in two majors in 2010, has been third at the US Open twice, including last year.

He coasted to a five-shot win at the Nordea Masters in Sweden on Sunday.

"I'll tee off on Thursday with a lot of confidence," said Westwood, who plays with Luke Donald and Rory McIlroy on the first two days at the Olympic Club.

Westwood will be making his 57th attempt to win one of the four major titles. The last two US Open titles have been won by Northern Ireland golfers Graeme McDowell and Rory McIlroy.

In 1998, he secured his first win on the American tour just a week before the Masters, but went on to finish a modest 44th at Augusta.

Since then, he has finished third or better in major tournaments on seven occasions, the Masters, in April.

His 22nd victory on the European Tour and 40th worldwide, came with a new set of irons and a new putter, which are not surprisingly expected to be in use again in San Francisco.

"I think they've earned the right to stay in," he said. "You're never too sure first time in the bag, but you don't win tournaments by five shots without playing really well.

"I missed a few short putts, but you just have to stay patient. Sometimes you don't have to do as much as you think."