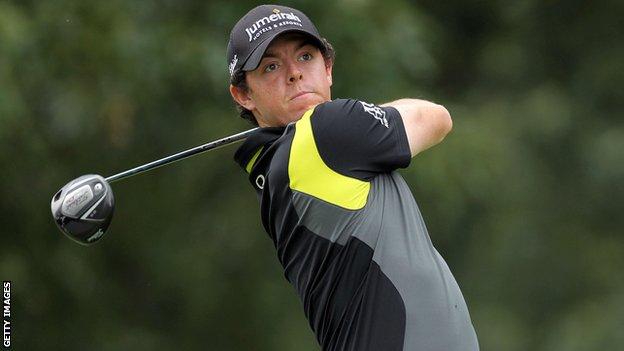 Rory McIlroy had to settle for a share of seventh place at the St Jude Classic as a final-hole double bogey ended his hopes of a morale-boosting win ahead of his US Open title defence next week.

McIlroy was sharing the lead as he stood on the 18th tee, but he found water on the last as he hit a 69.

Dustin Johnson clinched victory as birdies on the 16th and 17th helped him card a closing 66.

Johnson finished a shot ahead of another American, John Merrick.

Merrick went close to forcing a play-off as his chip for birdie at the closing hole just failed to drop.

Johnson, who won his sixth PGA Tour title, only returned to action recently after two months out because of a rib injury.

After missing the cut in his last three events, McIlroy looked set for victory after four birdies in his opening 11 holes moved him to nine under and two clear of the field.

However, the 23-year-old's momentum was halted by bogeys on the 12th and 14th.

The US Open champion moved back into the joint lead with Chad Campbell and Johnson after a superb birdie on 17.

However, his hooked three-wood tee shot at the final hole put paid to his hopes as he also failed to get up and down for bogey from just off the green.

Campbell also found water at the last and his closing bogey dropped him into a share of third place with Ryan Palmer, Nick O'Hern and US Ryder Cup captain Davis Love III.

England's Greg Owen ended up in a share of 11th place on five under after a closing 65, with Padraig Harrington a further shot back after a 69.

John Daly finished on three under as he fired a closing 64.