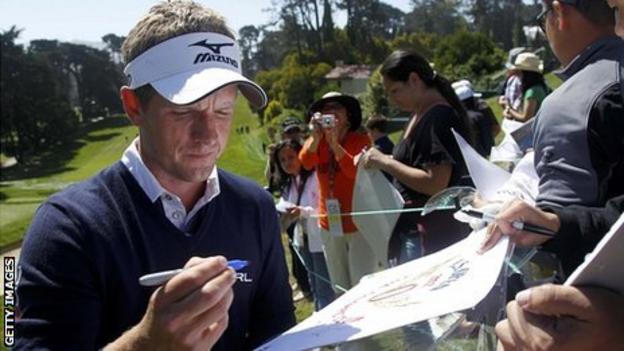 Golf's elite players reconvene for the year's second major on Thursday when the 112th US Open begins in San Francisco.

The Olympic Club has a reputation for surprise winners, but the game's big names will be looking to change all that.

BBC Sport assesses a selection of contenders for the title.

Has developed an uncanny ability to deliver when it matters - either to clinch the world number one spot or to capture the money lists on either side of the Atlantic. Just not to win a major. Successful PGA Championship defence at Wentworth for sixth win in 15 months is further proof he has become a formidable finisher. Cool temperament and killer short game the key. A major is all that is missing, though the US Open has not been a happy hunting ground in the past.

On the evidence of the last few months, the American must be rated as one of the hottest players in golf, with two wins (his first on the PGA Tour) and a second place in his last four events. Was co-leader with Fred Couples at halfway in the Masters in April and lost to Keegan Bradley in a play-off for the US PGA Championship last year.

A growing force in the game, or a bit flaky? Beat Rory McIlroy in a play-off for his first PGA Tour title in early May, was second the following week at the Players Championship and fifth the week after that. Throw in, too, a creditable tied fifth in the wind and rain of the Open at Royal St George's last summer. But a final-round 84 alongside Tiger Woods in the penultimate group at Memorial gives ammunition to the doubters.

The big-hitter looks to be back as a force to be reckoned with after winning in Memphis on Sunday in only his second event since returning from 11 weeks out with a back injury caused by lifting a jet ski off a trailer. Has acquired plenty of experience at the sharp end of majors - led the 2010 US Open by three shots going into the final round but crashed to an 82; missed out on a play-off for the 2010 US PGA after incurring a two-shot penalty for grounding his club in a bunker on the 18th; and played in final group with Darren Clarke at the Open last summer, finishing in a tie for second.

Landed a big one at the prestigious Players Championship in May, and while he has still to win a major, the four-time PGA Tour winner was tied third at the Masters this year. In all, five top 10s on the PGA Tour this term. In contention as an amateur at the 1998 US Open at Olympic Club and has flourished in the last three years to return as the world number six.

Shattered all sorts of scoring records when he won at a canter at a rain-softened Congressional last year to become the youngest US Open winner since Bobby Jones in 1923. Rose to world number one for the first time with victory at the Honda Classic in March, and has traded the top spot since with current incumbent Luke Donald. Despite the pre-tournament hype, the Masters was a disappointment and three straight missed cuts recently suggested all was not well. But he went close in Memphis last weekend to revive the confidence that has brought four other top threes around the world this season.

The perennial US Open bridesmaid. There is no-one the US Open crowd, especially in his native California, would like to win more than the popular left-hander. Won down the coast at Pebble Beach earlier this year and was third at the Masters, but a first-round 79, followed by an uncharacteristic withdrawal from the Memorial Tournament citing "mental fatigue" (despite having been on holiday in Europe) may have blotted his copy book.

The quirky left-hander with the pink driver wowed golf fans with his Masters victory. His unorthodox game might suit the Olympic Club - he rarely sees a straight shot, and shapes the ball both ways as a matter of course. A common sight near the top of PGA Tour leaderboards and ranked fifth in world, but has only played twice since Augusta, missing the cut at Memorial. Signs suggest he is yet to refocus, especially given the pull of a newly adopted baby son at home.

Slightly under the radar - if that's possible for a world number three - amid all the clamour surrounding McIlroy, Donald and Tiger Woods. Battling Old Father Time in the quest for a first major but still got a game ideally suited to the US Open - long, straight driving and accurate iron play. Putting always been the weak link in his game, though. Tied third last year, albeit 10 shots behind McIlroy, and one shot off a play-off in 2008. Also top 10 at Olympic in 1998. Won in Sweden on Sunday with a new set of clubs.

The Memorial win, and Bay Hill before that, confirmed Woods's new swing is seriously to be reckoned with - when it works. It let him down at the Masters but was impressive at Jack Nicklaus's event in Ohio. If he can produce some more magic like the chip in on the 16th en route to victory at Muirfield Village, to go with his trademark fighting spirit, he will be a very real contender to burst the dam that has kept him on 14 majors since 2008.