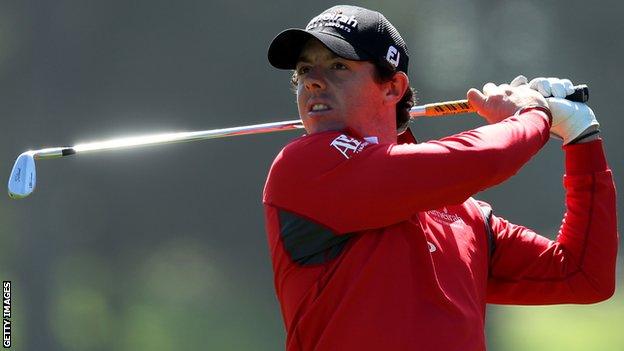 The world number two missed two cuts in America and one in Europe - failing to break par in any of those tournaments.

But the 23-year-old showed signs of recovery ahead of the US Open in San Francisco when he took a share of seventh place at the St Jude Classic.

"I think it's only natural you just start to question yourself and question your game a little bit," he admitted.

McIlroy hit a final-hole double bogey to blow any chance of winning the Memphis tournament but said he was just happy to have been in contention.

"That was a disappointing last few holes for me," said the Northern Irishman.

"But leading up to that point, I felt like I played some really good golf, and it was great to see.

"I hadn't played that sort of golf for a few weeks. It was nice to see that, especially coming into this week."

Three-time US Open champion Tiger Woods goes into the tournament bang in form after winning his 73rd PGA Tour title, at the Memorial.

Woods, who has not won a major in four years, went into the US Masters in April on the back of a win but says he is more confident this time.

"When I went into Augusta [for the Masters], I did not feel comfortable hitting the ball up and I got back into a lot of my old patterns. Unfortunately, it didn't work out," said the 36-year-old.

"What made playing Muirfield [for the Memorial tournament] so nice is that I had those shots and I was doing it the correct way. I had compression and I was hitting the ball high and hitting it long. That was fun."