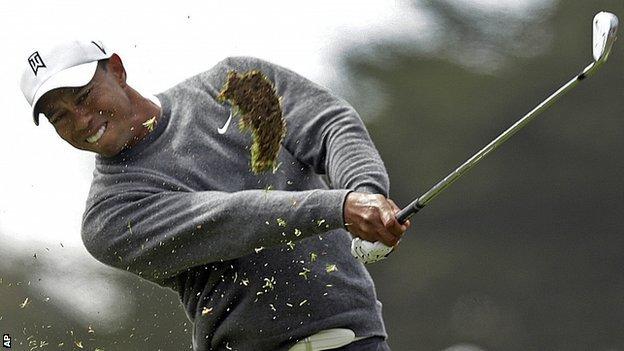 Tiger Woods launched his bid for a 15th major title in impressive fashion as he took a share of second place in testing conditions on day one of the US Open.

Woods's one-under 69 was only eclipsed by a stunning 66 from fellow American Michael Thompson but the former world number one looked in ominous form.

Justin Rose, Graeme McDowell, David Toms and Nick Watney were also at one under but some big names struggled.

World number one Donald finished on the same score as Chinese 14-year-old Andy Zhang, who was eight over after his first five holes at the firm, fast-running Olympic Club in San Francisco.

Lee Westwood, the world number three, was playing with defending champion McIlroy and Donald but fought back from a double-bogey start to card a respectable 73 as only six players broke par.

Woods, back up to fourth in the world after his recent win at Memorial, looked in complete control of his game as he looks to win a first major since the 2008 US Open.

A day where Tiger Woods had that 'look' and appeared in control, hitting 10 out of 14 fairways - some achievement given their narrow, sloping nature. But it is far too early to say that this might be a procession to a long-awaited 15th major. His 69 was good, but he will have to deal with the more difficult conditions as an afternoon starter in round two. The later 69s of Justin Rose and Graeme McDowell were perhaps more impressive and after a day of struggles even Lee Westwood hasn't done himself much damage after a 73.

The 36-year-old, who also won before the Masters but ended tied 40th at Augusta, began with five straight pars after starting at the ninth before dropping a first shot at the par-four 14th.

He made amends with a birdie at the 522-yard par-five 17th and fired back-to-back birdies at the fourth and fifth, the latter courtesy of a 30-foot putt, before a final bogey on the sixth.

"I played well - I felt like I had control of my game all day and stuck to my game plan," said Woods.

"I was very pleased with every facet of my game and I stayed very patient."

Masters champion Bubba Watson, who took 78, said of his playing partner's display: "That was the old Tiger. That was beautiful to watch.

On his own wayward performance, the left-hander added: "The course beat me up today. It's a lot better than I am - it beat me by eight."

Thompson, a qualifier who reached the final of the US Amateur at the San Francisco course five years ago, was two over after six but made six birdies to leave the field trailing.

"This is one of my favourite golf courses, so I've got good feelings coming in here," said the 27-year-old, who is in his second year on the PGA Tour.

McIlroy, who won by eight strokes and broke a host of scoring records at Congressional last year, said: "I tried to approach it like any other tournament I play and tried to go out there and shoot the best score I could.

"It wasn't my greatest day, but hopefully I can come out and try and shoot a good one and at least try to be here for the weekend."

Donald, who in part blamed his putting, added: "The top three in the world [with McIlroy and Westwood] and we make three birdies between us - it shows how tough it is."

Five-time runner-up Mickelson lost a ball with his first shot and his day continued in a similar vein.

"I didn't play very well, obviously," said the four-time major champion. "I've got a tough challenge just to get to the weekend. I will see if I can shoot under par - maybe that will get me there."