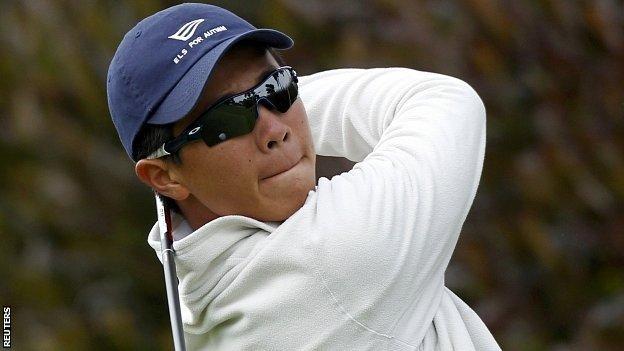 Chinese teenager Andy Zhang carded a creditable 79 on day one of the US Open at the Olympic Club in San Francisco.

The Florida-based 14-year-old amateur was fifth reserve but made the event, becoming its youngest ever player, when England's Paul Casey pulled out.

"It was really tough, so I'm actually OK with what I shot," he said.

Zhang began with a triple bogey and double bogey followed by three straight bogeys but he fought back to birdie the seventh on the demanding Lake Course.

Who is Andy Zhang?

He dropped another shot at the eighth and made a double-bogey seven at the 670-yard par-five 16th before adding a birdie on the 18th to break 80.

"On the first tee I was like 'please don't hit a 100-yard slice' and was shaking really hard, but I hit a great shot," he added.

"I shot eight over for the first five, then made a par and I knew how to play golf a little bit after that.

"I think I kept myself pretty calm and I'm really proud of myself actually.

"Well I shouldn't say proud, but I'm really happy and honoured to be here."

At 14, Zhang beats the record of Tadd Fujikawa, who was 15 when he qualified for the 2006 US Open at Winged Foot.

Tiger Woods, who won the first of his 14 majors at the age of 21, said of Zhang's qualification: "I tried it when I was 15, but he went through both stages - he earned his spot.

"It's not too young if he did it and just think of the experience he is going to gain, and how well that's going to serve him."