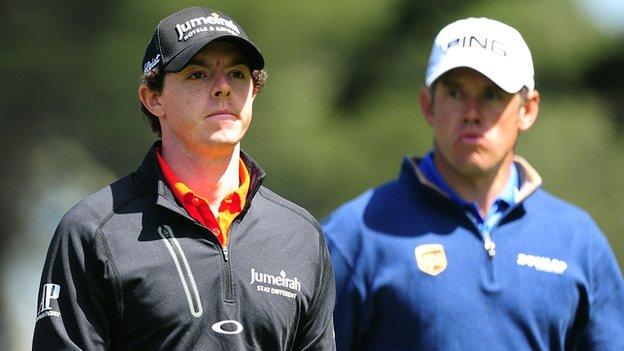 Westwood carded a creditable three-over-par 73, seven off the lead but six shots better than fellow Englishman and world number one Luke Donald.

Westwood said: "It's set up hard, the greens are very firm, there's a breeze. It's a very difficult golf course."

The 39-year-old, chasing his first win in a major tournament, stopped short of calling the course unfair, but added: "You hit a lot of good drives that don't end up on the fairways."

Westwood, McIlroy and Donald, the world numbers three, two and one respectively, were expected to comprise one of the low-scoring threesomes on the opening day.

But Westwood opened with a double-bogey six before bogeys at three and six took him to four over par.

However, he settled the ship with a birdie at the short par-four seventh and a second birdie at 17 kept him very much in contention.

While Westwood trails leader Michael Thompson by seven shots, there are only 23 players ahead of him and the punishing conditions suggest the winning score could be above par.

It wasn't my greatest day

Unheralded American Thompson fired a first-round 66 but he leads by three shots from a group of five players, including Tiger Woods, on one under par. Another Englishman Justin Rose also ended one under alongside Northern Ireland's 2010 champion Graeme McDowell, while Rose's friend and compatriot Ian Poulter was level par.

Westwood added: "I don't give up, I keep battling. You've just got to try to get as much out of your rounds as you can.

"It's a case of not giving in and trying not to make too many mistakes. You don't want to play chasing golf around here, firing at the pins. I'm pleased with three over par after the start."

Donald, also looking for a maiden major title, had nine bogeys and no birdies in a torrid first round, while McIlroy had eight bogeys and only one birdie.

"My putter kind of went cold, otherwise I could have probably ground out some more respectable score," said Donald.

It's sort of sadistic fun

"The top three in the world and we make three birdies between us - it shows how tough it is.

Asked whether the trio had tried to gee each other up he added: "We were focused on ourselves mostly.

"There was a little bit of chat out there, but not too much. The US Open demands your full attention and obviously Lee had a good back nine (one under after all three turned in four over), but Rory and I both struggled."

McIlroy missed only 10 greens in regulation during the entire tournament 12 months ago but in his opening round on Thursday, he missed 12.

"I tried to approach it like any other tournament I play," he said. "I tried to go out there and shoot the best score I could.

"It's just so tough here if you put yourself out of position at all. Too many times I just was in the wrong position off the tee or with my second shot.

"When you're trying to play catch-up on this golf course it's very hard.

"It wasn't my greatest day, but hopefully I can come out tomorrow morning and try and shoot a good one and at least try to be here for the weekend."

Rose, winner of a world championship event in Miami in March, said: "It was fun out there. You had to hit great shots to keep it in play and to get it close to the hole.

"You can't get ahead of yourself for one second out there. It's going to be a long, hard week ahead of all of us and that's really my mindset.

"It's sort of sadistic fun. Mediocre stuff gets penalised for the most part."